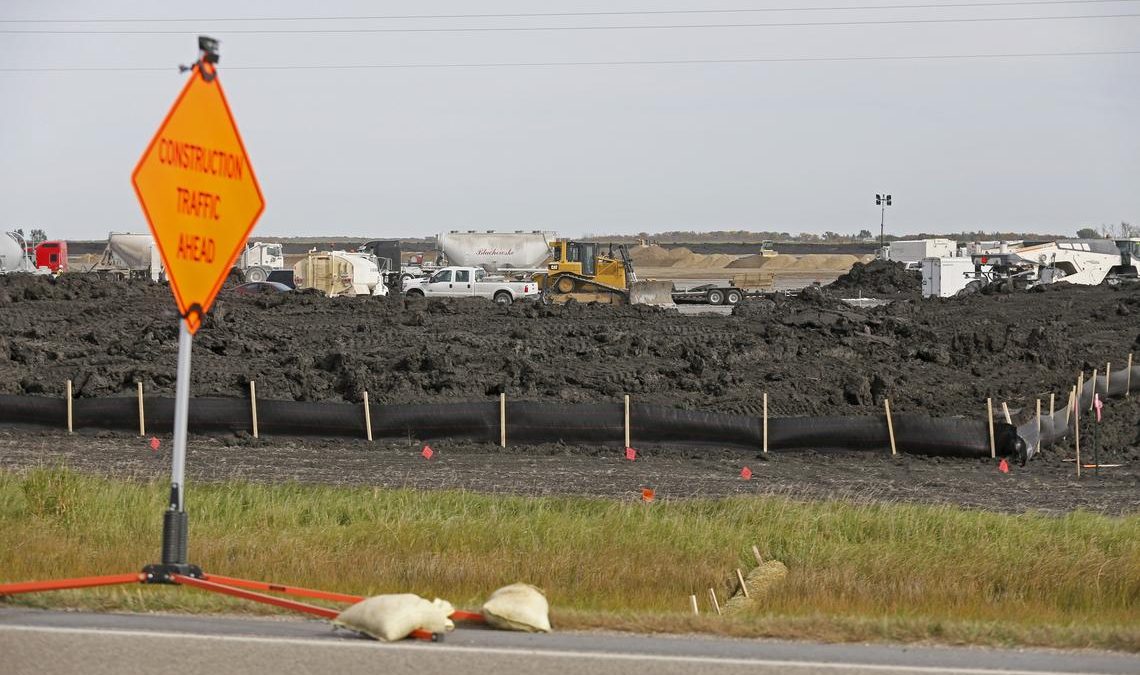 Similar facilities being constructed by Ryan Companies in Sioux Falls, S.D., and Tucson, Ariz., for months led to speculation that the planned 1.3 million-square-foot building near Fargo’s Hector International Airport was also going to be a distribution center.

Large equipment is used on Sept. 29 at the major construction site located at 3701 40th Ave. N. in Fargo. David Samson / The Forum

According to a building permit, the structure will be built in the area of 37th Street and 40th Avenue North on an approximately 110 acre site recently annexed and rezoned by the City of Fargo.

Officials and developers said the facility is expected to open in 2021.

Mahoney said the entire project’s cost could end up being somewhere between $100 million and $120 million, which he said would be similar to the Block 9 project now being built in downtown Fargo.

An Amazon spokesman said when the facility opens the base pay for workers will be $15 an hour and all workers will receive a comprehensive benefits package that includes health insurance and a 401K retirement plan.

Dan Mueller, as spokesman for Ryan Companies, said the 350,000 cubic yards of material that have been hauled to the building site would fill 140,000 pickup trucks and he added the building’s 1.3 million-square-foot footprint could hold 19 football fields.

By comparison, officials said, the Fargodome has 460,000 square feet of space.

Officials said Amazon received no monetary incentives to locate the facility in Fargo.

They added, however, that one of the things that made the area attractive to the company was the speed with which local, state and federal officials were able to satisfy regulatory requirements to expedite construction.

“I think we moved this thing in record time,” Hoeven said.

Although local business owners have talked for years about the difficult time they have finding workers to hire, Mike Flannery, regional director for Amazon, said the company believes it will have a talented pool of potential employees to tap into when the distribution center opens sometime next year.

Joe Raso, president and CEO of the Greater Fargo Moorhead Economic Development Corp., said workforce issues exist everywhere in the country. He said one of the things the Fargo area has going for it is a strong commitment to developing its workforce through programs like career academies.

Amazon was described at Friday’s news conference as a “virtual mall.” Asked whether the new facility would mean more competition for brick and mortar businesses, Burgum said that to some degree it would.

However, he added that there will continue to be a demand for goods and services that brick and mortar businesses offer and he said competition ultimately benefits consumers.

Burgum also noted that more than 2,000 small businesses in North Dakota already sell products over Amazon and he said the importance of the Amazon option is clear in western parts of the state, where he said every rancher he knows has an Amazon Prime account.

“It saves them half a day, getting in the pickup driving to Bismarck, or Minot, or Williston to get a part. Rural states win under the Amazon Prime model,” Burgum said.