Should we shield businesses from COVID-19 lawsuits?

Did you get mystery seeds in the mail? Don't plant them

The town of 600 has been there all along, about 33 miles north of Moorhead at the intersection of U.S. Highway 75 and Minnesota Highway 200. It’s nestled in western Norman County, along Red River, just 10 miles east of Interstate 29.

And it’s always been proud of its sugar beets (“You Can’t Beet Halstad,” say the shirts and coffee cups in the local hardware store).

But now they’ve gone one better with that 21-foot-tall beet sculpture. It’s 8-feet in diameter and weighs in at 10,000 pounds. The project will cost about $65,000 — $30,000 for the sculpture itself, another $35,000 for the rest of the park development, which includes an electronic sign for community notices.

The sculpture has only been in place for about two months and it’s already working. Passers-by are already stopping to take selfies, even before “Sugar Beet Park” has sod and before the addition of those 2-foot sugar cube sculptures that will carry industry information.

The “World’s Largest Sugar Beet” sculpture stands 21 feet tall, in what will be known as “Sugar Beet Park” at the intersections of U.S. Highway 75 — the “King of Trails” — and Minnesota Highway 200, at Halstad, Minn. Photo taken July 17, 2020, at Halstad, Minn. Mikkel Pates / Agweek

The family of farmer/businessman Gregg Holte came up with the idea for the attraction at a backyard family campfire.

“We were looking for something to promote our community, and set it aside, and set it apart from everyone else,” Holte said.

His son-in-law, Jeremy Melting, an employment recruiter, is president of the 14-member Halstad Business League, which spearheaded fundraising.

“I thought it was a fantastic idea,” Melting said. “It certainly represents what a lot of families and farming operations have had as part of their business. The Red River Valley is more-or-less synonymous with sugar beets — my perspective.”

Another big fan is John Hinkley, who with his wife, Pauleen, has owned Valley Hardware and Supply for 21 years. The Hinkleys are opening Valley General Store, a grocery, hardware and off-sale liquor store. “Any chance to bring anybody to town is worth trying. It puts our name on the map,” Hinkley said.

The community’s first fundraiser was in March 2018. American Crystal was “very supportive, both financially and with ideas,” Holte said, and the Red River Valley Sugarbeet Growers Association was into it. Several other businesses in Halstad, Ada and Hillsboro supported it. 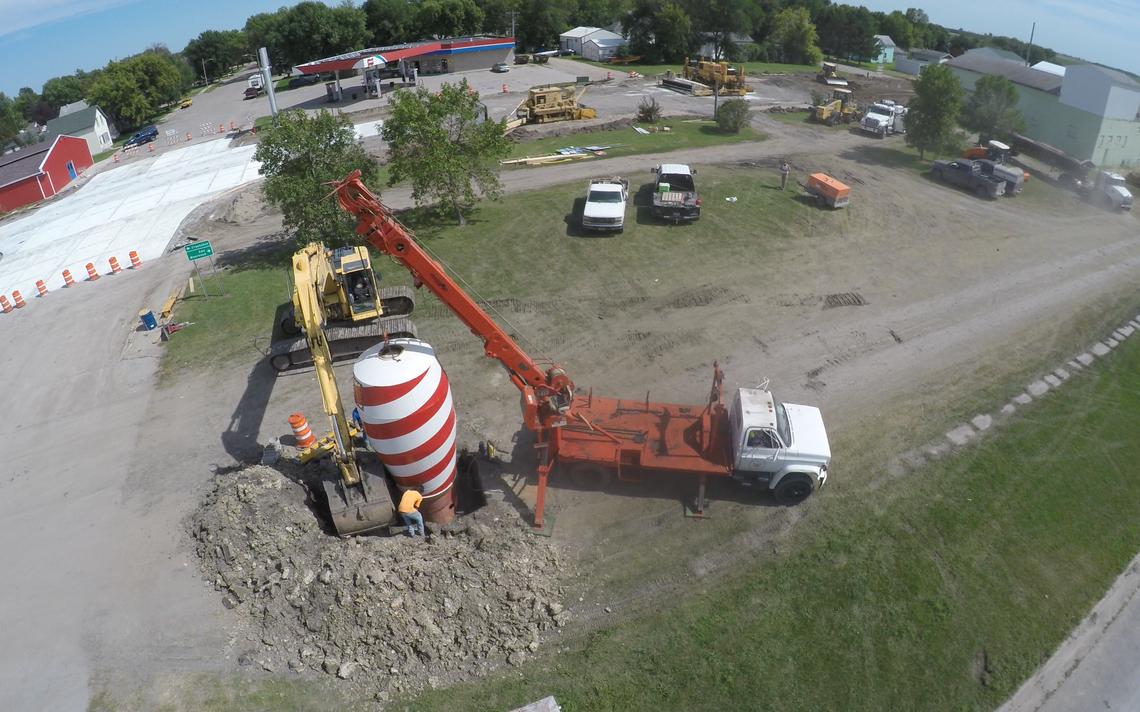 A 10,000-pound red-and-white inverted concrete truck mixing tank was put in place Aug. 23, 2019, at Halstad, Minn., which made the form for the sugar beet sculpture. (Photo courtesy of the Gregg Holte family)

Holte, 68, grew up 5 mile north of Halstad in rural Shelly Township, where his Norwegian immigrant family homesteaded in 1872. He graduated from North Dakota State University and came home to be the fifth-generation farmer. His son, Michael Holte, stepped up as the sixth generation on the farm and raises about 540 acres of beets.

Five years ago, Gregg Holte took a position as a sales representative for the Steffes Group, a Fargo, N.D.-based auction company. Holte talks with clients about consigning equipment for sale or booking auctions and real estate.

Few know more about sugar’s impact than Holte. His family started raising sugar beets on their farm in 1974 with the start of the Red River Cooperative at Hillsboro. That co-op merged into the American Crystal Sugar Co., also a farmer-owned cooperative of five factories in the Red River Valley.

“Sugar beets was the most stable revenue crop we had, profitable in more years consistently than the other crops we raise,” he said. Farmers have the satisfaction of owning shares of a company that processes farmers’ own products, he said. Holte spent 12 years on the board of the Red River Valley Sugarbeet Growers Association and served as the association’s legislative liaison to the Minnesota Legislature.

The whole family is on the bandwagon. Gregg’s wife, Pam, was a local educator. His oldest step-son, Jeremy Paulsrud, farms on the North Dakota side of the border at Hillsboro. Nick Paulsrud is a crop consultant at Valley City. Daughter Emily Finney owns an insurance office that handles crop insurance. Another daughter, Kristi Melting, has a hair salon.

They were all talking about sugar in 2017, sitting at the campfire in Kristi’s backyard. They agreed that agriculture is Halstad’s strength.

“We went for the world’s biggest,” Holte said. 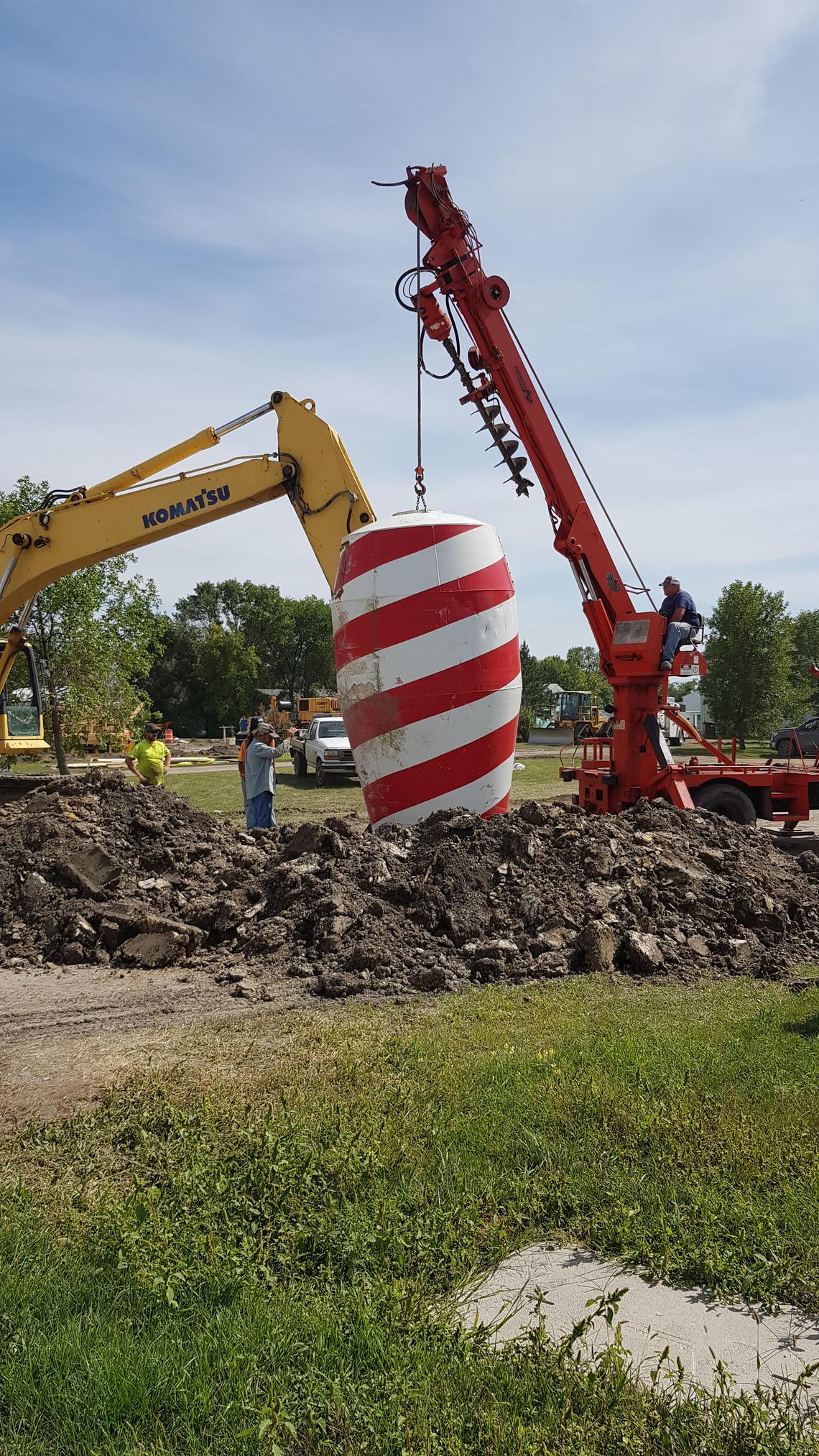 Promoters hired sculptor Josh Porter of Merrifield, Minn., who’s done this kind of work in other towns. Porter came up with a concept and brought a small clay beet as an example. They decided to pick a standing beet, with the root still in the soil.

They talked about budget and cost, including the number of leaves.“They’re fairly expensive, made of steel,” Holte said. “They’re $1,500 apiece. So we limited it to five.”

Porter would form it around a cement-mixing truck drum as the form.

They set the red-and-white cement mixer on its end concrete footings in November. Porter, a native of East Grand Forks, Minn., arrived in late January. He surrounded the structure with 3-by-4-foot straw bales, with a roof top, so it could be heated. 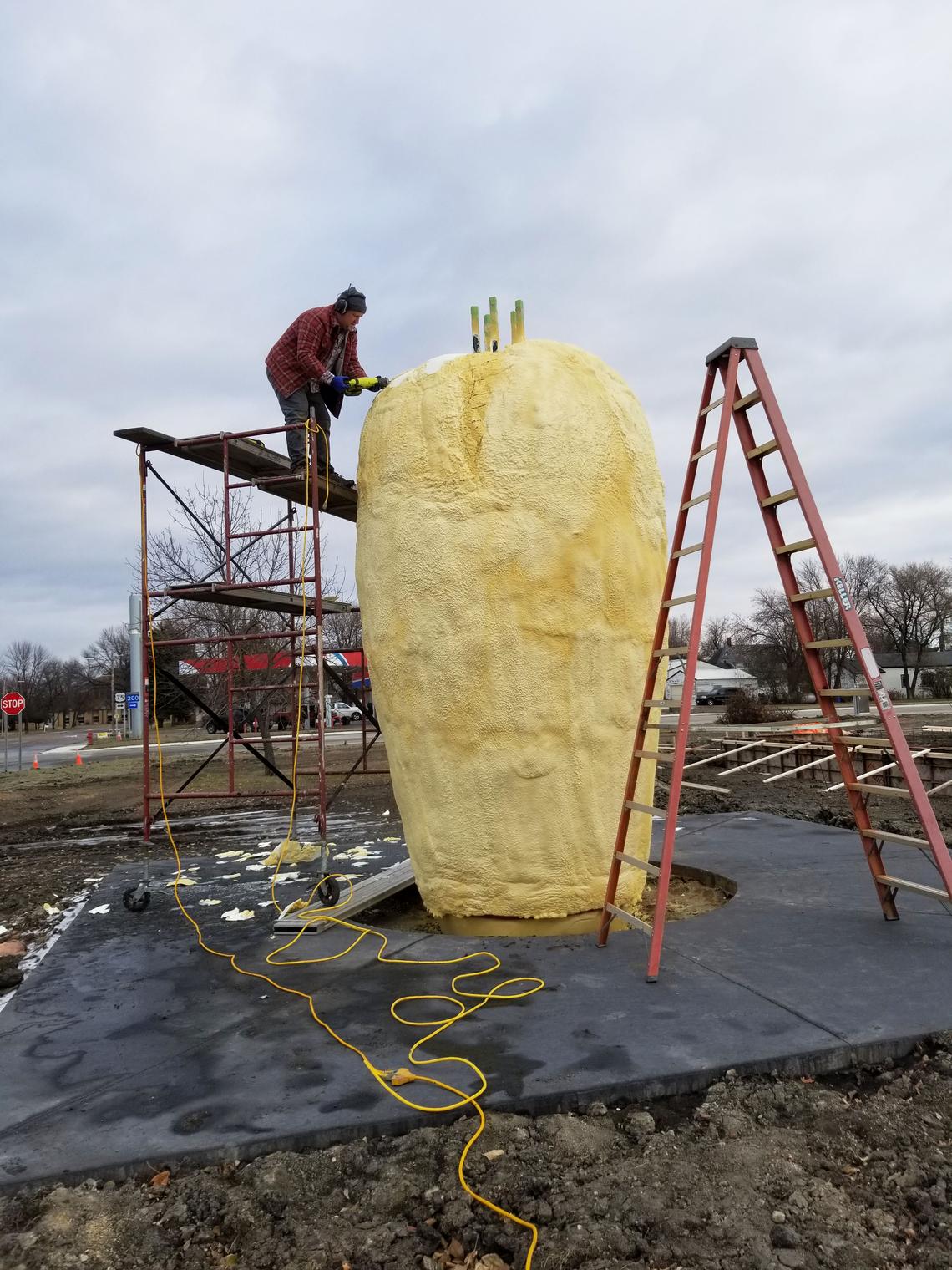 Over about 10 days, Porter formed the beet with spray foam insulation, including the groove that is characteristic of the root crop. He later sprayed a bedliner-type of protective coating around it, painting and finishing that coat with a seal coat. 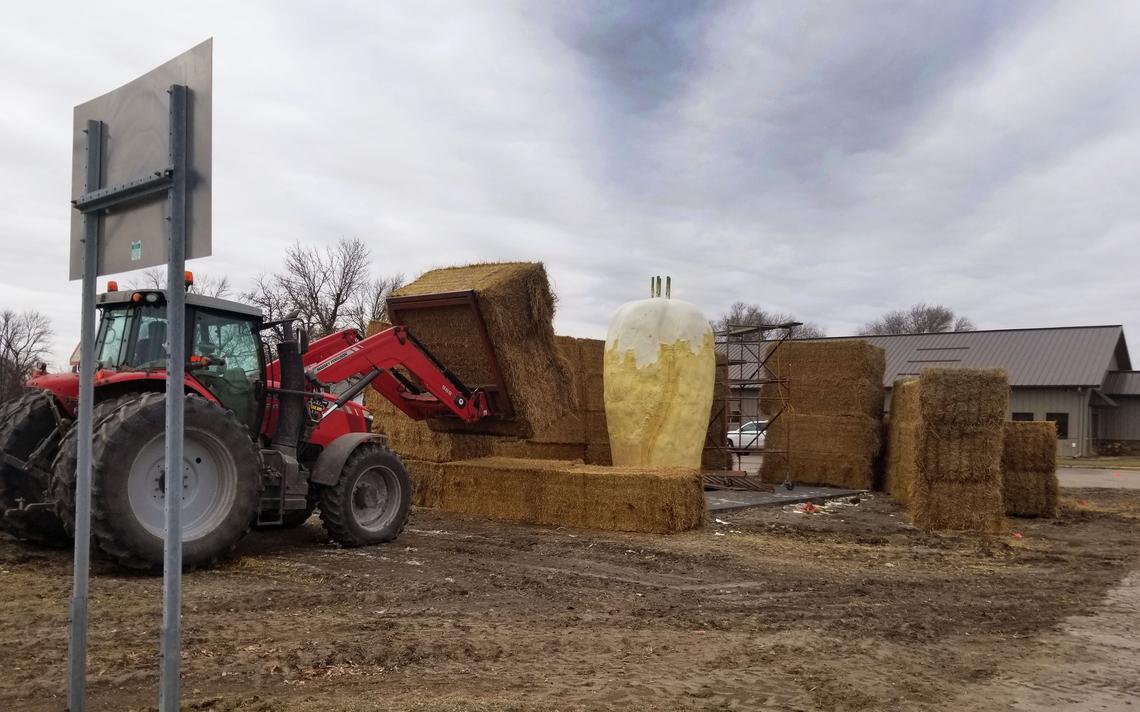 Minnesota Tourism has posted the attraction to its “Historic King of Trails” site, an association of community attractions and events along U.S. Highway 75, from Luverne to Hallock, Minn.

Holte looks forward to setting a nice dedication event, but says, “With COVID-19 pandemic, it’s hard to set anything.” He isn’t worried about defending the claim of largest beet.

“There’s one in Idaho that might be taller, or longer — or whatever — made out of MESH, but we know we’re the HEAVIEST,” Holte said, quietly, firmly. He paused and smiled: “We’re not going to be out-done by anybody with a MESH sugar beet!” 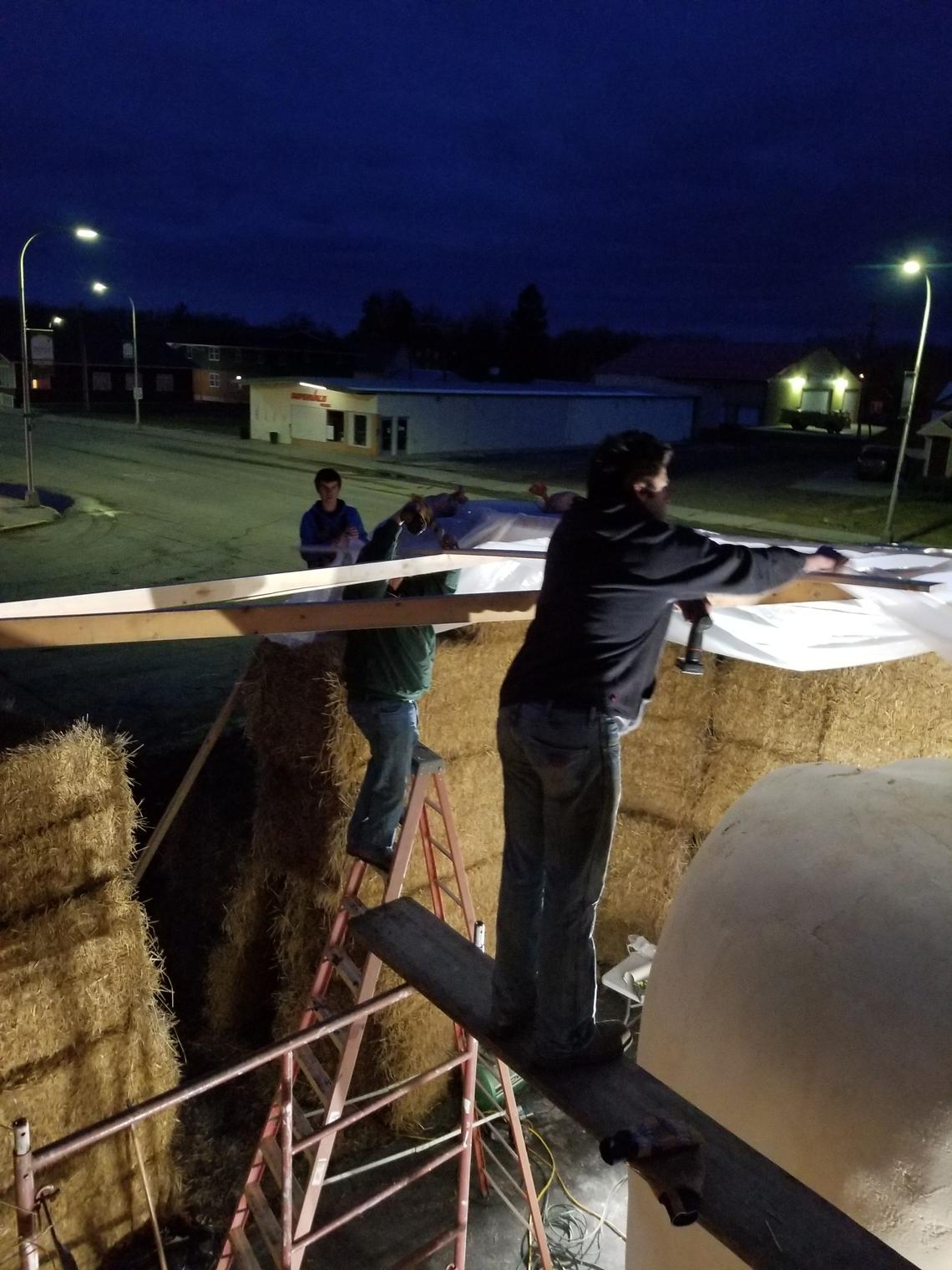