Twitter to establish legal entity in Turkey, comply with law

Even as life insurance payouts increased, Securian buckled down and saw growth for 2020 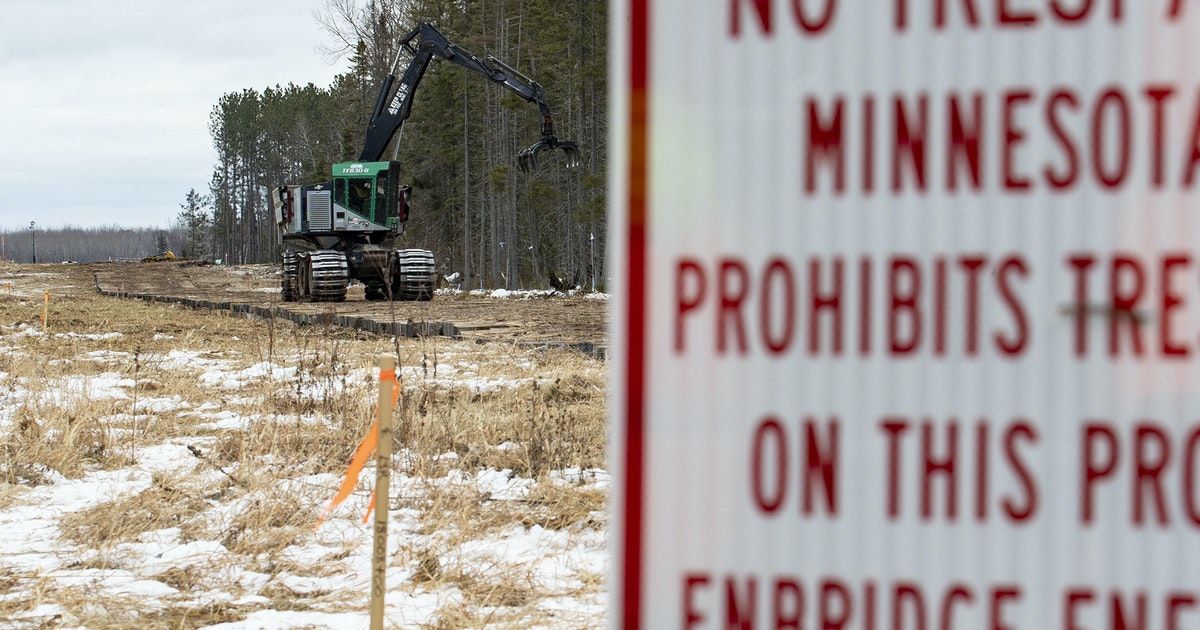 The demand for oil — and thus the need for Enbridge’s controversial new pipeline — will take center stage this week before the Minnesota Court of Appeals.

It’s at the core of an attempt to overturn the state’s blessing of new Line 3, a $3 billion-plus project that is already half built. If the appellants are successful, work on the pipeline could be frozen.

The court battle pits two arms of state government against each other: The Minnesota Department of Commerce and the Minnesota Public Utilities Commission (PUC), which approved the pipeline. Commerce, along with pipeline foes, has long argued that oil demand — including from Canada — will fall as the world migrates from fossil fuel. Enbridge didn’t properly account for that transition, they say.

“Enbridge failed to provide a demand forecast to establish that the crude oil supplied by Line 3 was needed,” the Commerce Department said in a court filing.

Enbridge has long argued that its corridor of pipelines across northern Minnesota is so full that it can’t meet oil shippers’ demands — a condition that will continue for a long time.

The PUC agreed with the Calgary, Alberta-based company. Enbridge “submitted a sufficient demand forecast [that] was reasonable and supported by substantial evidence,” the PUC said in a court filing.

The PUC, an independent state agency, said the Commerce Department and other appellants have a high bar to clear: Under Minnesota law, the PUC is presumed correct due to its “expertise,” and courts therefore should show deference.

But Commerce, an arm of Gov. Tim Walz’s administration, argues the PUC isn’t due any deference because its decision contradicts the “plain language” of Minnesota law.

The Court of Appeals is scheduled to hear oral arguments on the matter Tuesday, and will then have 90 days to reach a decision.

Line 3 opponents also have appealed the U.S. Army Corps of Engineers’ pipeline permit to a federal court in Washington D.C. (The Department of Commerce isn’t part of that action).

Either court could pull a key Line 3 permit and at least temporarily halt construction, or stop Enbridge from operating the pipeline before oil can begin flowing. More than 4,000 trades workers have been building new Line 3, one of the largest Minnesota construction projects in recent years.

Enbridge began building new Line 3 in December after a six-year battle before Minnesota regulators. The new pipeline will replace Enbridge’s existing Line 3, which is corroding and operating at half capacity due to safety reasons.

The company pitched new Line 3 largely on safety improvements, an argument that weighed heavily in the PUC’s approval. The new pipeline will restore Enbridge’s full flow of oil.

New Line 3 partly follows a new route, raising fears among environmental groups and Ojibwe tribes of oil spills in a new region of lakes, streams and wild rice waters. They also oppose Line 3 because they say it will exacerbate climate change.

Petitioners before the appellate court Tuesday will also include the Red Lake Band of Chippewa; the White Earth and Mille Lacs bands of Ojibwe; Indigenous environmental group Honor the Earth; and three other environmental groups: Friends of the Headwaters, the Sierra Club and Youth Climate Intervenors.

While their appeals touch several issues, including the adequacy of the state’s Line 3 environmental review, most specifically dispute Enbridge’s oil-demand forecast. (It’s the Commerce Department’s only issue).

In 2017, the Commerce Department under then-Gov. Mark Dayton concluded that a new Line 3 wasn’t needed and the old pipeline should be shut down. Enbridge has enough capacity in its six-pipeline corridor across Minnesota to meet long-term demand, the department found.

The six pipelines — the largest conduit of Canadian oil into the United States — transport oil bound for refineries in Minnesota, the broader Midwest and the Gulf Coast.

In Commerce’s view, motor-fuel demand will fall in the long term as electric vehicles take off and fuel efficiency grows in traditional cars.

Other plaintiffs argue, too, that oil demand will be increasingly diminished by government policies to curb carbon dioxide emissions.

Enbridge’s oil outlook is rooted in output forecasts made by Canadian oil producers, meaning they are essentially rooted in supply and not demand, the appellants say.

Commerce argues that under state law, Enbridge instead must factor in total “energy demand.”

After Commerce’s initial criticisms in 2017, Enbridge retooled its forecast, assuming a 75% market penetration by electric vehicles in the U.S. by 2035. It concluded new Line 3 would still be fully utilized.

Commerce has criticized that analysis, saying Enbridge — while it did project reduced U.S. gasoline use — continued to assume that oil or motor fuel not consumed here would be exported, even though demand will be declining globally, too.

The PUC accepted Enbridge’s revised demand forecast, noting in a court filing that it included some variables supplied by the Commerce Department.

“The proper focus [of the forecast] is not on the consumers of oil products around the globe but the shippers who use the pipeline and pay Enbridge.”

The PUC noted, too, that its focus on oil shippers is consistent with its past practice in reviewing new oil pipelines.

A group of Enbridge shippers, in a court filing, said new Line 3 is needed to cure “apportionment” — rationing of oil on Enbridge pipelines due to a lack of a capacity. “These high levels of apportionment are forecast to persist,” they said.

The shippers noted their confidence is backed by a commitment to finance Line 3, paying a surcharge on all barrels of oil transported on Enbridge’s pipeline corridor.

The PUC, by state regulation, considers a 15-year forecast for oil pipelines, even though they are built to last for decades. Some Enbridge pipelines in the Midwest were built in the 1950s.

The Canada Energy Regulator, a government body, projects that Canadian oil production will increase steadily and won’t peak until 2039. Enbridge is bullish on the next two decades, too.

“Although we believe that we’re moving toward a lower carbon economy, the transition is going to be gradual and conventional energy will be essential for decades to come,” the company said in statement.

But some global oil companies and analysts are less sanguine, forecasting “peak oil” demand by 2030. Last fall, BP said demand has already peaked in two of its three working forecasts.

Royal Dutch Shell said earlier this year its crude production has peaked. Shell is one of six companies that have at least partly exited Canada’s oil patch in recent years due to its relative cost disadvantages.

“You essentially will have a shrinking pie for oil and lots of competitors,” said Scott Strand, an attorney for Friends of the Headwaters. “And you have a competitor in Canada with higher costs.”