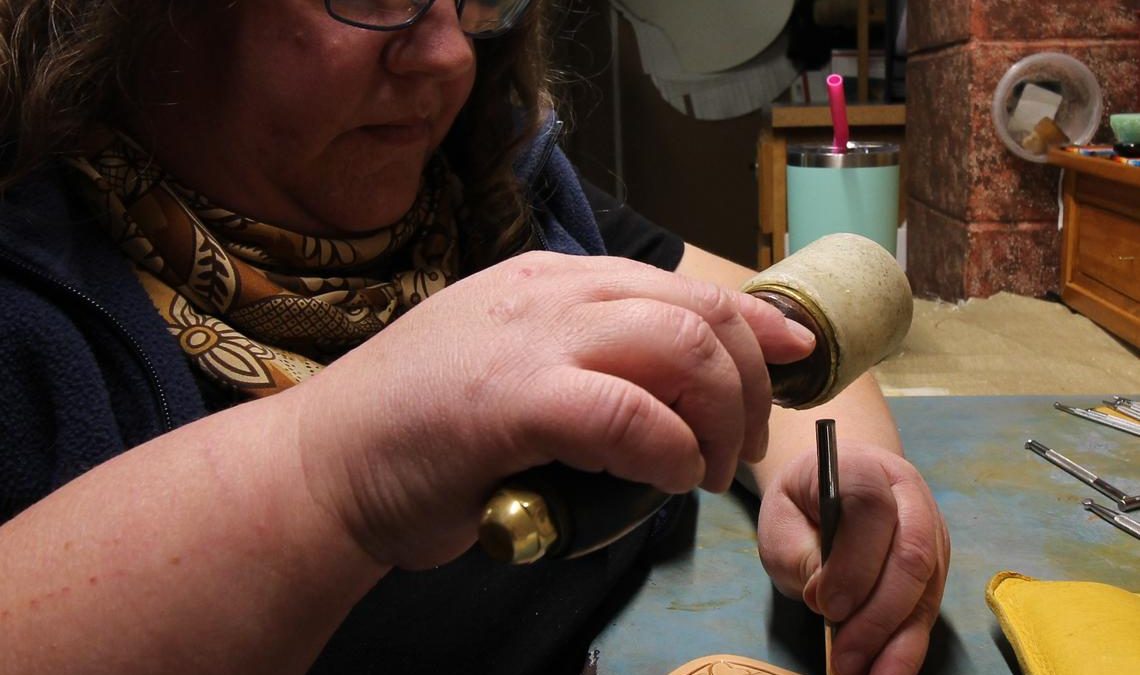 Doug and Jennifer Kuschel have been teaming up to make saddles, tack, riding gear and elaborate leatherwork ever since Jennifer was about 12.

“She came in and started helping me clean up the shop,” Doug said. “She wanted to learn the big stuff right away, but I said she had to start at the bottom of the broom. I thought, if she sticks this out then maybe there was a chance for her to learn. She did and she’s been here ever since.”

For Doug, leatherworking and saddle making started with a need. Doug was born and raised not too far away, on a cattle ranch that his parents started after World War II. He grew up with two brothers and a sister, two of whom still live nearby. About 46 years ago, Doug bought a farm and continued the family trade, raising beef. It wasn’t until 1983 that he got into leather.

“I was always interested in leather,” Doug said. “Also, I rode inferior saddles that were poorly made and I figured if that guy could make one, I could make one better. That’s where it started.”

The craft was not an easy one to learn. Like many traditional handcrafted skills, skilled leatherworkers closely guarded their methods and usually only shared their skills with handpicked apprentices. Doug said there were very few books on the subject, and obviously no YouTube videos.

“I got a saddle that I really liked and started tearing it apart to see how it was made,” Doug said. “I kind of figured it out. Then a few years later I ran into a fellow who was a harness maker named Johnny Johnson. He helped me along. He was very instrumental in a lot of questions that I had no answers for.”

Doug started attending leatherworking shows in the ’90s. Around this time, traditional leatherworking was starting to become less common, and Doug said master leatherworking artisans started to realize their skills might go extinct if they continued their secretive way.

So they began to make videotapes and sell books. Doug bought everything he could and learned ravenously. The business, 33 Ranch and Saddlery, has been officially in operation since approximately 1995.

“My saddles have gone to Hawaii, Alaska, Wyoming, the western states, eastern states, southern states,” Doug said. “They’ve basically gone all over. I make tack and smaller stuff to go along with them to complete the outfits like breast collars and saddlebags.”

Doug’s favorite part of making saddles is the final, complete project and seeing it all come together and work as a single piece. With all the planning and work involved, it is no surprise that Doug’s favorite part would be the final product and big picture. Even before he touches leather, he draws out his plans on paper, then gets a feel for the shape the buyer will need for their specific purposes and for their specific body type.

Everything needs to be custom built to fit the customer, and their specific horse, like a glove.

He works with leather sewing machines, some of which leatherworkers have been depending on for more than 100 years. His main machine was constructed in 1910; his slightly newer machines were built during World War II. Much of the leather is cut with knives with half moon shaped blades, and he stamps the leather with a variety of leather stamps.

Every scrap of leather that is cut off gets a purpose, from becoming samples of stamp patterns for prospective buyers, to becoming part of the tack. Things are then joined with a combination of sewing and stainless steel rivets. Doug is careful that they use high quality leather and parts.

Doug specializes in saddles over anything else, though they have occasionally worked on other large projects. They not only build saddles from the ground up, they also do restoration of saddles and other leather items. One memorable project was restoration of a collection of five or six Deer Lake Shotgun cases that were more than 100 years old.

While her father likes to work on saddles, Jennifer specializes in accessories big and small. She makes everything from wallets and belts to leather chaps and chinks (a shorter variety of chaps). In her 20s, she had continued doing the leatherwork she learned in her teens, and when she moved back to Minnesota from Idaho years ago she rejoined her father. She shares shop space with him, though much of his workshop is in the back, while hers is in the front. She especially likes small, detailed work.

“I do wallets and belts because you can take a small piece and just do a really fantastic job,” Jennifer said. “Sometimes when you are doing a big piece it seems like it gets spread out a bit. If you look at a small item you can really see the craftsman’s workmanship. You can’t hide anything.”

Her work has been recognized, sometimes in bigger places. Among other projects, she was commissioned by the Minnesota Farm Bureau to make a clutch purse for Miss America’s Betty Cantrell. She really enjoys the very personalized nature of her special orders.

“I had a grandma order chaps for her grandkids,” Jennifer said. “Each one had different colors and had their initials on them. They were a really unique project.”

That doesn’t mean she doesn’t do larger jobs. Several years ago she was responsible for making the chaps for Miss Rodeo Minnesota.

“Everyday customers are unique and they all have different stories,” Jennifer said.

Jennifer loves tooling, painting and coloring leather. The shop is full of extravagant leather accessories, jewelry and other items that she has poured her talents into.

Jennifer said she got into leatherworking because she used to love riding and she wanted the nicest gear possible, which meant either spending a lot of money or making it herself. Today, she has found somewhat of a niche of making sure a traditionally overlooked subset of customers can find quality gear.

“I’ve kind of gone down the rabbit hole of making plus sized items,” Jennifer said. “I made a pair for myself. I was embarrassed that I had to make plus sized chinks for myself. I found out I was not alone. Some of them have talked to other saddleries and they told them they don’t make them.”

She takes pride in being able to outfit people who work hard but don’t necessarily fit a one specific “cowgirl” shape.

Doug and Jennifer are continuing a tradition that once likely had more adherents. Today, their market is full of plenty of mass produced leather products, but they work hard with the expectation that their attention to detail and quality will make them stand out.

Like many leatherworkers before them, it seems they will be able to teach a new generation to continue their trade into the future.

Jennifer’s brother, Levi, is continuing the family legacy of farming, one which started long before Doug was even born. Levi’s daughter, however, might have been bit by Jennifer’s and Doug’s leatherworking bug.

“My niece who loves horses and cattle comes in here and she’ll make jewelry and do some little leather projects,” Jennifer said. “She might be the next generation.”