Russia to make Sputnik V vaccine in Italy; a 1st in EU

Weeks Ahead of Schedule, Minnesota’s Hospitality Workers Are Next in Line for Vaccines 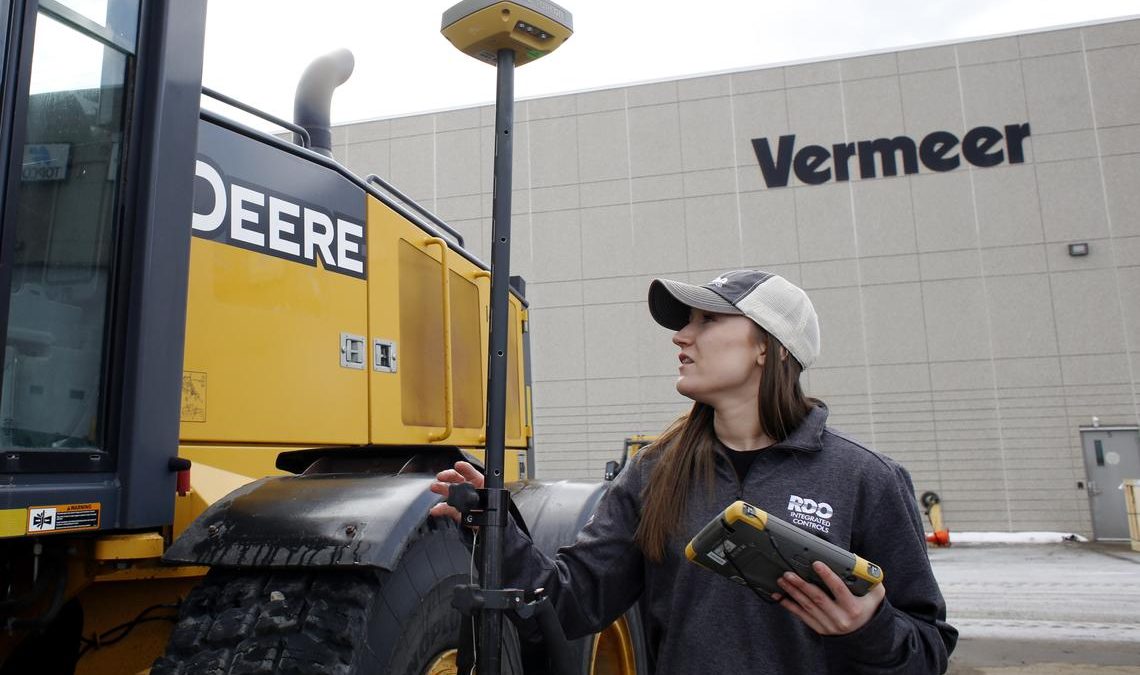 Yet she still manages to look like a ballerina.

Hair pulled back in a careful bun, she sports a dancer’s posture. One leg is crossed in front of the other and her toes are pointed outward, much like ballet’s fourth position.

When someone points this out, she laughs. While growing up, she studied ballet so fervently that she’s not even conscious of the inner dancer who sometimes springs to the surface.

Except now the former pre-professional ballerina has traded arabesques for air-intake systems and the ballet barre for pry bars.

When Westman realized in high school that she wasn’t quite good enough to dance professionally, she knew she needed a new career. After working at local farms and ranches, she lasered in on the only other profession that truly intrigued her: mechanical repair. She pursued a bachelor’s degree in diesel technology at Montana State University-Northern with the same unflinching drive and exacting discipline she once devoted to dance.

“I always had an interest in it, but never really got the opportunity to do it. I needed a career, because I’m not going to sit at a desk,” she says. “So now I’m in a career where I make good money and I love it.”

Today, she is one of two female service technicians who work out of RDO Equipment’s Moorhead headquarters. She and good friend Makenzie Lako, a service tech in RDO’s construction division, have thrown a wrench in outdated notions of what women “should” do for a living.

The Bureau of Labor Statistics reports that women fill just 4% of jobs in technician fields today, although diesel techs like Lako and Westman are working to change that. In fact, RDO has four women working as service techs across the country.

Christi Offutt, board chair of R.D. Offutt Company, reinforces RDO’s company-wide commitment to diversity. “Makenzie and Emma are truly role models and paving the way for what I hope are many more young women to join the industry,” Offutt says. “We know that talent is gender-blind and there are likely many more women who are interested in working in this industry but hesitant because they don’t see others. Through their example, women like Emma and Mackenzie are taking away that reticence and replacing it with inspiration.”

Indeed, Westman and Lako are big ambassadors for diesel technology, speaking at length about the unlimited room for advancement, the rewarding challenge of working on today’s complex, highly automated equipment and the excellent earning potential, with wages starting at $20 to $22 an hour for techs fresh out of a two-year tech-school program. With several years of experience, a diesel tech can make $60,000, when also factoring in overtime, base wage and the company’s profit-sharing program, says Ryan Johnson, RDO’s vice president of human resources.

Mike Wollschlager, aftermarket manager at RDO, says it was the two women’s enthusiasm and commitment that convinced him they were a perfect fit for his team.

“I have a few things that I look for in a great team member,” he says. “First and foremost, I am looking for someone who is passionate about the work, our customers and our industry. Continuous improvement is also important so I look for people who are willing to learn and, also, who are willing to help others learn. Often it is the individual with the great attitude and culture fit who is hired, not always the one with the most technical experience.”

Born with diesel in her veins

A native of Arthur, N.D., Lako grew up around family members who farmed, did construction and repaired tractors.

But she didn’t seriously entertain a diesel-tech career until a high school automotive mechanics class. One day, the class hosted a guest speaker, who happened to be Wollschlager, her future boss. He talked about the company’s Access Your Future program, which helped reimburse up to $16,000 of a participant’s college tuition after they signed on with RDO.

Lako, the only female in the class, found herself looking around the room at her classmates.

“I thought, ‘All these guys should be interested in this. This is a great opportunity,’” she recalls. “I’m looking at them, not thinking this could be something for me. And then I woke up one day, and thought, ‘Why not me?’”

Her mother wasn’t overjoyed when she shared her career plans; she’d hoped Lako would become a doctor like other family members. In fact, the young woman faced plenty of skeptics, who told her she didn’t know enough about engines to do it. Later, when she started her first semester with the John Deere diesel-tech program at North Dakota State College of Science in Wahpeton, she learned that several young women before her had started the program, but eventually dropped out.

“They didn’t expect me to last, basically,” says Lako, now 24. “But after a while when they saw my passion and drive for it, everyone respected me just like anyone else.”

In 2017, she graduated with honors from NDSCS as the first female to complete the elite John Deere diesel-tech program.

Lako started at RDO as a service technician in the ag department, then worked in the parts department and lawn and garden division for three years. Her current job is on RDO’s construction side, where she installs, updates and repairs Topcon construction automation systems like GPS.

Westman has been with John Deere for four years and for the last 1 1/2 years worked at RDO on diesel systems and the sophisticated Automated Machine Systems common to today’s agricultural equipment. 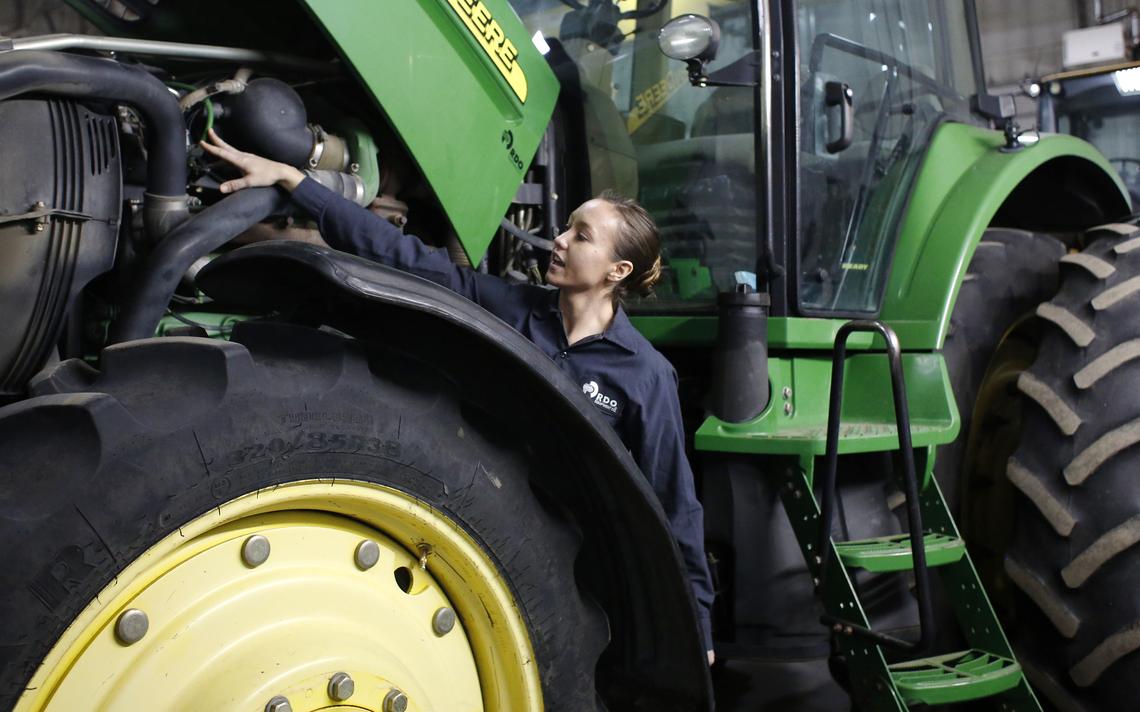 The two women said their new co-workers were initially super-cautious around them, and wouldn’t even crack a joke within earshot. But in time, their coworkers realized they could relax and be themselves. Today, they describe their colleagues as “super-supportive,” and “like a family.”

“We aren’t delicate flowers,” Lako says. “We’re in this field because we have tough skins.”

Initially, they had to be tough. While working in the parts department, Lako sometimes encountered customers who would look right past her and ask if they could speak to one of the male service techs in the back. In one case, a customer pointed to a male shipping and receiving employee nearby and asked if he could speak to him. “The shipping employee told the guy, ‘I know nothing,’” Lako recalls. “She knows 100 times more than I do.”

Both women say they feel they always need to do their best to help pave the path for the women who follow in their footsteps. Westman, a self-described perfectionist who keeps her work bay in meticulous order, says she will never ask a question until she’s exhausted all avenues to find the answer herself.

And both believe that, as women, they add a unique viewpoint to diagnosing, troubleshooting and repairing problems. “Men and women think differently. We bring a different perspective to the table and we add value,” Lako says, adding that she believes their approach tends to be a bit more detail-oriented and organized. “You have a whole room of men and you bring in just one female and it’s a different perspective. You’re just adding value to the company.”

Both also believe that knowing their craft goes a long way toward warding off the skeptics.

“I had a bachelor’s so I was on the right foot when I entered,” Westman says. “I have such a thirst for knowledge that I knew so much about my job. That put me in a good position to not let people influence me. When you know the most, people respect you for that.”

She adds that mechanics aren’t automatically encoded in male DNA. “Just because he’s a guy, doesn’t mean he knows anything more about diesel than you do.”

Which begs the next obvious question: If diesel tech involves removing tractor engines and transmissions, how do two women — one a former ballerina, the other nicknamed “half-pint” by her co-workers — handle it?

Both admit the work is very physical, so they also work out to keep in shape. “You’re basically moving large pieces of iron around all day,” Westman says. “I am incredibly strong, but I don’t weigh as much, so I need bigger tools. I have bigger breaker bars, I have 2 3/4-inch impact (drivers). My stuff is bigger because I need more leverage.”

The size difference makes them problem-solve more creatively. “Sometimes you just have to think outside the box: How can I use a crane or hoist or how can I do it differently?” Lako says. They also aren’t afraid to ask male colleagues to lend a hand when muscle is needed.

In fact, they say the favor goes both ways. Sometimes, their colleagues need someone petite to squeeze into a narrow space. “I can make myself stronger, but guys can’t make themselves smaller,” Westman says, laughing.

When the two techs go home at night, they can talk to partners who know what they’re talking about. Westman is married to another diesel technician, who works at Case IH.

Lako’s boyfriend also has a diesel-tech degree, although he now works as a quality control specialist for TerraCon Concrete Precast. “I could never imagine dating someone who didn’t at least work in the trades field,” she says. “I can’t date a guy who doesn’t know how to change his own tire.”

Their parents have also grown to embrace their career choices. Westman’s family, she says, highly values skilled trades. Lako’s mother, once disappointed that her daughter didn’t enter health care, now listens in excitedly when she sits down with her dad to talk mechanics. “She’ll say, I have no idea what you’re talking about, but I’m so impressed,’” Lako says, laughing.

So what advice do they give to other young women who might want to follow in their tracks?

Westman neatly ticks off four: “Don’t let lesser people influence your decisions. Ask for advice from those you respect and whatever you do, do it better than anyone else. And do not be one of the guys. Diversity is what makes us stronger.”

Says Lako: “Go for it. You can do whatever you put your mind to. We are perceived a little bit different when we step into the field, but don’t let it stop you. This industry is so vast and wide. There is so much potential. And women bring so much value.”