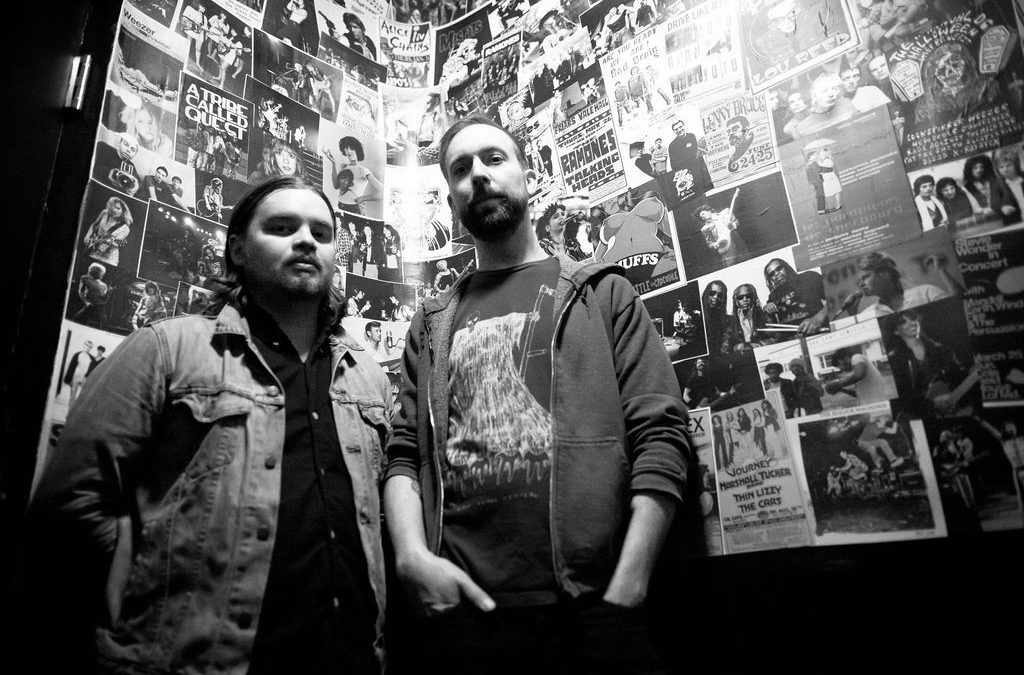 Meteor Bar should have been the new spot all the cool kids were cramming into every night in 2020. Located between Minneapolis’s trendy North Loop and Northeast neighborhoods, it was run by two well-known and beloved bartenders making fantastic, straight-forward cocktails for a reasonable price. But when the pandemic worsened and drinking in bars was all but outlawed, the bartenders behind the would-be hit had to figure out a new way to do business.

Late at night, wiping wet mats, stacking glasses, and cleaning up after another busy restaurant night at one of Minneapolis’ highest profile restaurants, Elliot Manthey and Robb Jones would bandy about ideas for the perfect bar. Elbow-deep in the process of prepping juices for mixers, lugging boxes, and sliding the glittering bottles onto the top shelf, they would trade fantastic ideas and rules for how they’d run their place. It would be a bar that’s just a bar, not too clean, not too brightly lit, nothing that would seem like they were trying too hard.

Although the two bartenders have worked in food and beverage at the top cocktail restaurants around the Twin Cities, their bar would hold almost none of the fine-dining trappings. It had to be dark. The playlist would be important — Manthey is also a musician and both have strong opinions about almost everything. The drinks wouldn’t be fussy, just straightforward pours and whatever else they felt like fooling around with.

Then somewhere in the depths of 2019, the two decided it was time to stop fantasizing and turn this idea into a reality.

As with all things, they knew the location would be key. The duo had almost signed a lease with a monthly payment that would have been a bit of a reach when Jones saw a listing for a space on Craigslist. The bar was in a neighborhood dominated by warehouses, just down the street and around the corner from a topless bar. The address is as close to Minneapolis’s trendy North Loop neighborhood as it was to intersections more likely to appear on a crime blotter. However, the lease was affordable, not far off from a reasonable rent on a Minneapolis apartment. Even if the wasn’t a lines-out-the-door success, the lease could still be paid with a few slow nights of business and a lot of hard work on their part. 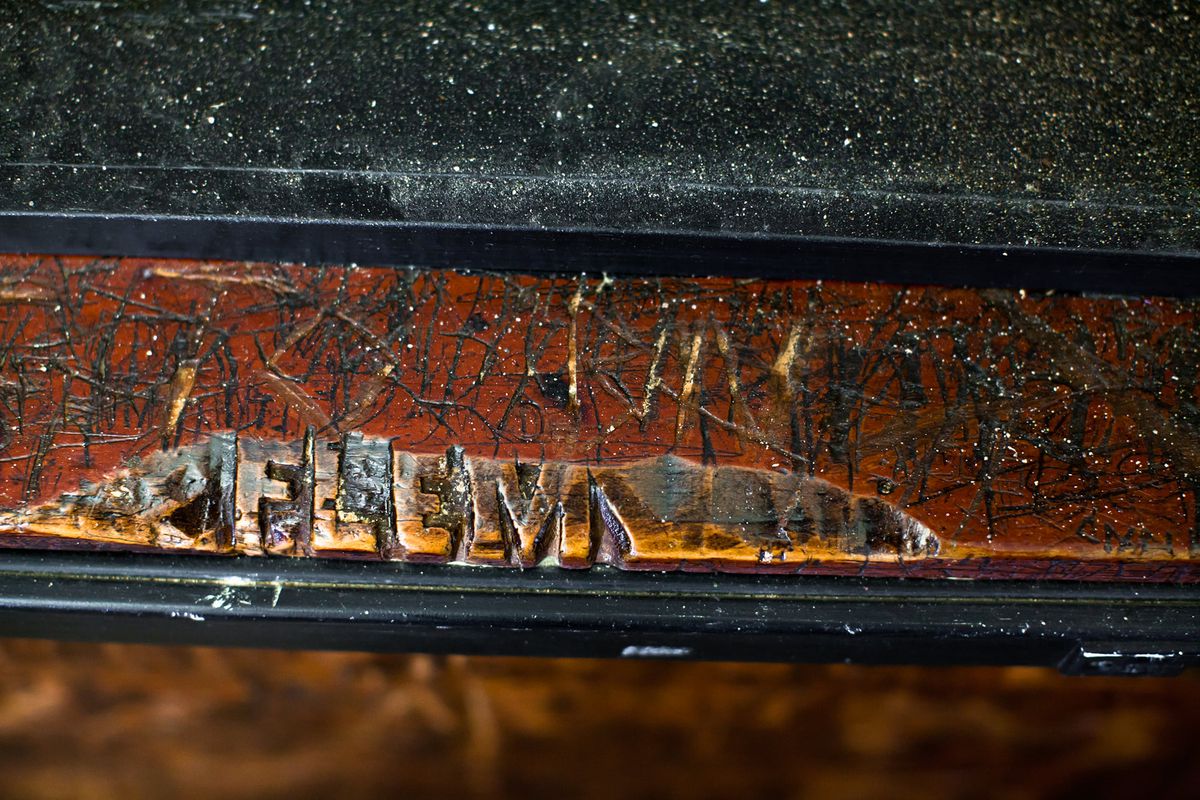 Meteor’s bar, where past patrons left their mark Meteor/Facebook

What followed were hours of work. Looking to do it all themselves as cheaply as possible, the duo recruited family members to rip out fixtures, scrape off layers of paint, clean, and paint. One fellow bartender, Travis Serbus, who had opened the award-winning cocktail program at Lyn65, materialized without even being asked to come and help. “Travis showed up and he just kind of never left,” said Jones.

With each layer of grime and wallpaper, the bar’s past lives were exorcized: the “snuggery,” the zombie-themed bar, and the old dive bar known for serving Leaving Las Vegas-style drinkers. When they’d finished, all that remained was a dark exterior and the original wooden bar inside. Then, they set to building the dream bar they had once fantasized about. The entrance was wallpapered with recreated punk concert posters. The newly redone interior was simpler, trading the gimmicks and shock factor for a simpler aesthetic: long, lean, and old. The wooden bar’s curved edges were worn smooth from years of elbows resting on it. A few low, black tables lined the wall opposite the bar. An art deco-style light fixture shaped like a flying saucer dimly lit the predominately black room. The bathrooms were barely big enough to turn around in.

The opening menu was simple, a selection of boilermakers (shots with a beer back) and a few cocktails that the guys loved to make. Nothing was more than $13. “This place has only ever been a bar. It doesn’t have to be a fuckin’ zombie bar, we can just open a bar,” said Jones.

“[Meteor] was based on places we’d go in other towns, these grungy old bars with good cocktails where other bartenders love to go,” said Jones. 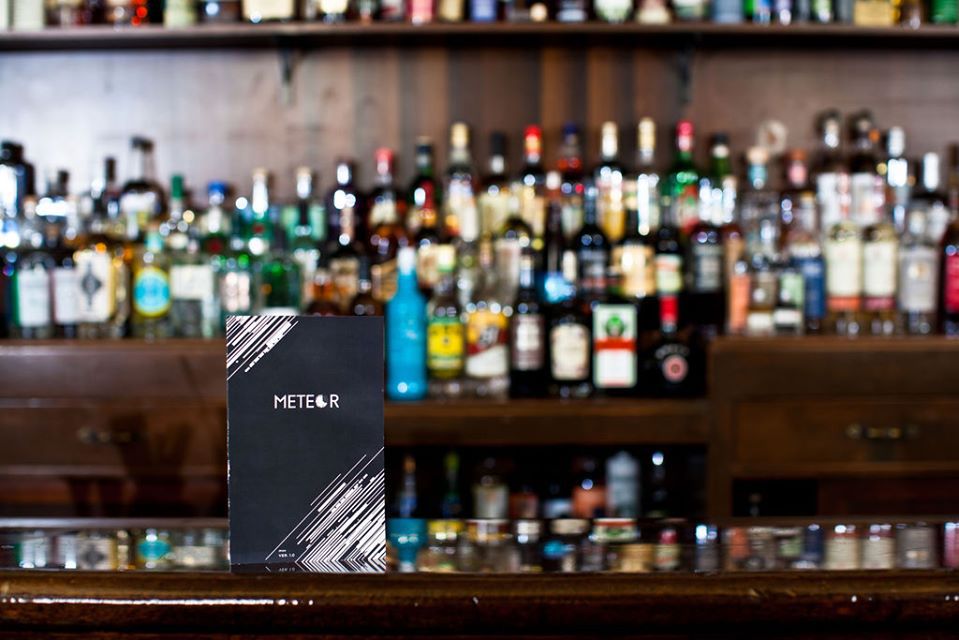 From the beginning, Meteor was built to be a grungy old bar with good cocktails Meteor/Facebook

From the beginning they’d wanted to make a space that other people in the industry would flock to, but they weren’t expecting to draw so many bartending candidates that staffing the bar would no longer be an easy task. “There were so many people we turned down,” said Manthey. The allure for so many veteran bartenders? Inside Meteor, they could just be themselves, instead of representing the identity of the bar or restaurant they worked for. Most nights here were a who’s who of top bar talent from around the city.

Even in the depths of a Minnesota winter, Meteor was an immediate hit when it opened on December 22, 2019. Because of the cold nights and the weird post-holiday timing, it drew a steady hum of drinkers without ever reaching overflowing capacity crazy. “We were making a lot of daiquiris, Negronis, and Old Fashioneds,” said Manthey.

“In two months, people dug it. We were doing well,” said Jones. Then, the coronavirus pandemic began to creep in. “We were seeing NYC shut down…”

“We were hoping that if it shut down, it’ll be like two weeks,” Manthey said. “The Fed will issue a mandated shutdown.”

Of course, that is not what happened. A mandate enforcing the closure of restaurants and bars landed in Minnesota on March 17. Since then, bars that don’t serve food have struggled to open at all, in any capacity. Currently, Minneapolis bans patrons from actually sitting at a bar.

After the closure, all of the duo’s employees filed for unemployment or started looking for other jobs. Some have left the industry completely.

Within Meteor’s short-lived regular life, the two had been diametrically opposed to making a big to-do about food, despite Jones’ former life working as a chef. There was a countertop pizza oven. Jones would, add some banana peppers and balsamic vinegar to a frozen Mucci’s pizza, but that was where he drew the line. The only other food offering were bags of potato chips.

State mandates during the pandemic required all bars to remain closed completely, but allowed bars serving food to be counted as restaurants, and therefore to open for to-go service. Restaurants serving food can sell one six pack or one bottle of wine with each food order placed. “[State regulations] were so specific on what it had to be, it was absurd,” Jones said. They invested $140 in a hot dog roller. “It’s easy to make good stuff to put on hot dogs,” Jones said. “It’s a little flavor boat.”

So, they launched a new era, take-out only hot dogs with outrageous toppings all whizzed up together — kimchi, mustard, and crispy onions served on little sausages and buns tucked into a white paper boat. Plus, eaters could also order a specially-curated sixer of the bartenders’ favorite beers from the Meteor stock. They also branched out into selling t-shirts, some frozen slushie drink mixes in cans, cocktail bases, and more. (Minnesota continues to ban to-go alcohol sales.) 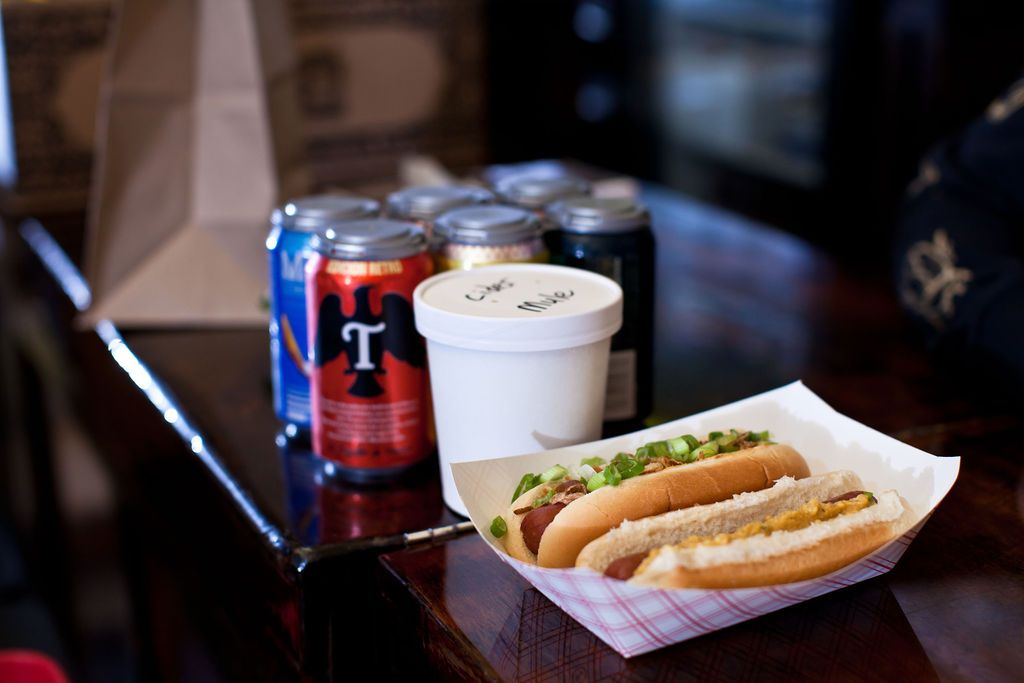 “It worked for the first three weeks, and then nobody cared. We’d be here for 10 hours and make $40,” said Jones.

In June of 2020, restrictions began to relax, and bars and restaurants were allowed to reopen at limited capacity. While many turned to expanding patio seating, that wasn’t in the cards for Meteor. “We’re right across the street from a lutefisk factory,” said Jones.

The putrid aroma of lye-cured fish was unpleasant enough when the wind wafted fumes over Meteor’s parking lot in the wintertime. Hot summer nights didn’t improve the smell. 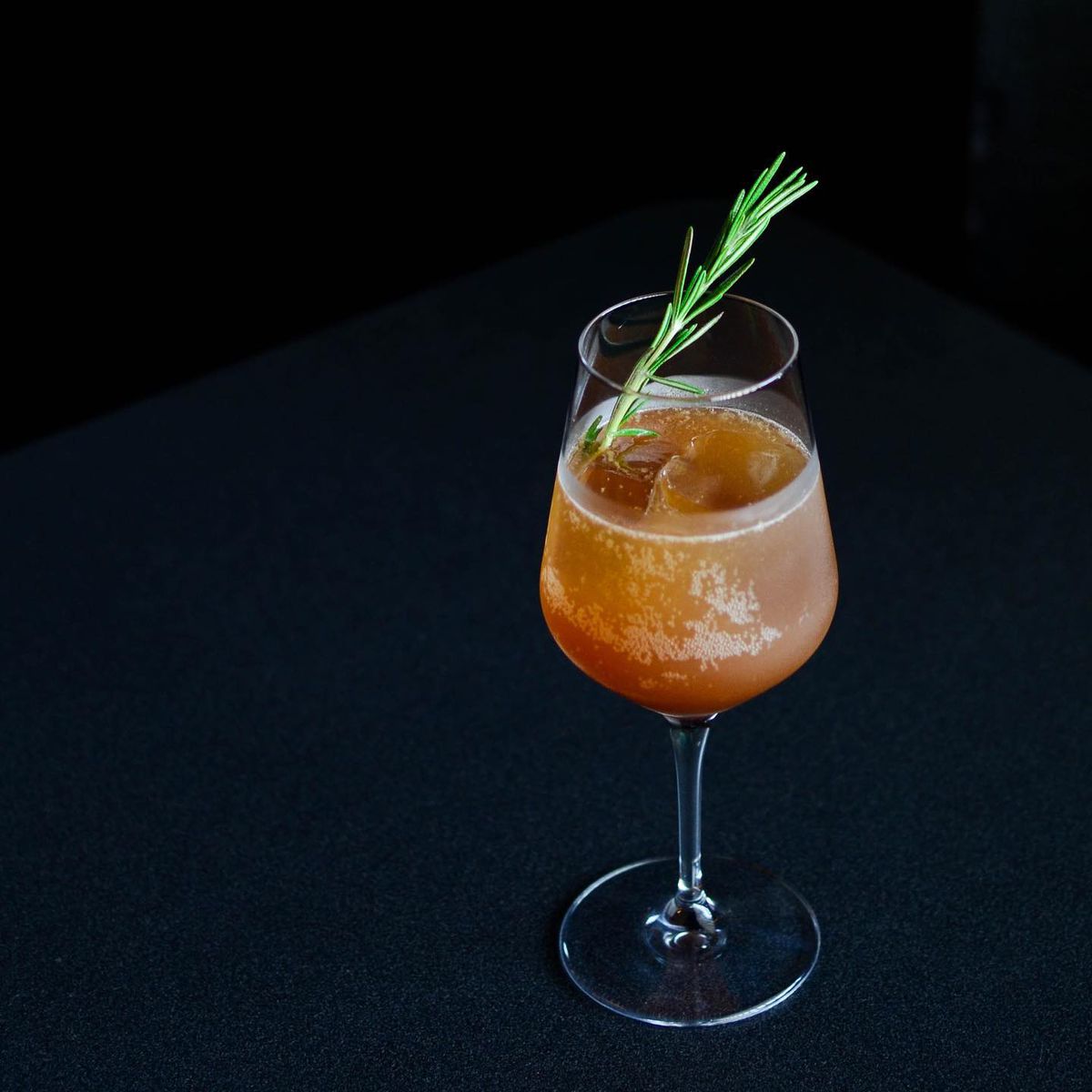 Even in weird times, the cocktails continue to be outstanding Meteor/Facebook

Meteor Now, Meteor is offering limited seatings for their three-cocktail flights. “People get to pick one zero proof cocktail. The drinks have super elaborate presentations, harkening back to our fine dining roots a bit, and there are takeaways,” said Jones. “We have to do something that’s a little bit higher ticket. We’re breaking even right now. The fact that we’re able to pay ourselves and pay our bills. And the feedback has been great.” Plus, there are now even more fancy, little snacks.

Meteor went from selling $9 daiquiris to centrifuges, and clarifying, and digging into their creative reserves. “We’re just having fun,” Manthey said. Although, since the two are the only employees, the service can be a bit rocky.

“At least once a shift I have to say, ‘Can you tell I’m not a trained server?” Jones said.

“I don’t know what to do with my hands,” Manthey said.

Up next, Meteor will evolve again, and lean into the bar’s name. There’s a giant crater in the Yucatan that’s supposed to be where the meteor that caused the dinosaurs’ extinction landed. Sort of Apocalypse Meets Childhood Love of Dinosaurs. Cocktails will be made from flavors from around the region and the Caribbean. Kind of tiki, but… not really. “What if a couple of dinosaurs opened a tiki bar, but they don’t know what they’re doing?” Jones said. “Plus, we have a pinball machine now! We got it for free. We didn’t spend our PPP money on a pinball machine.” 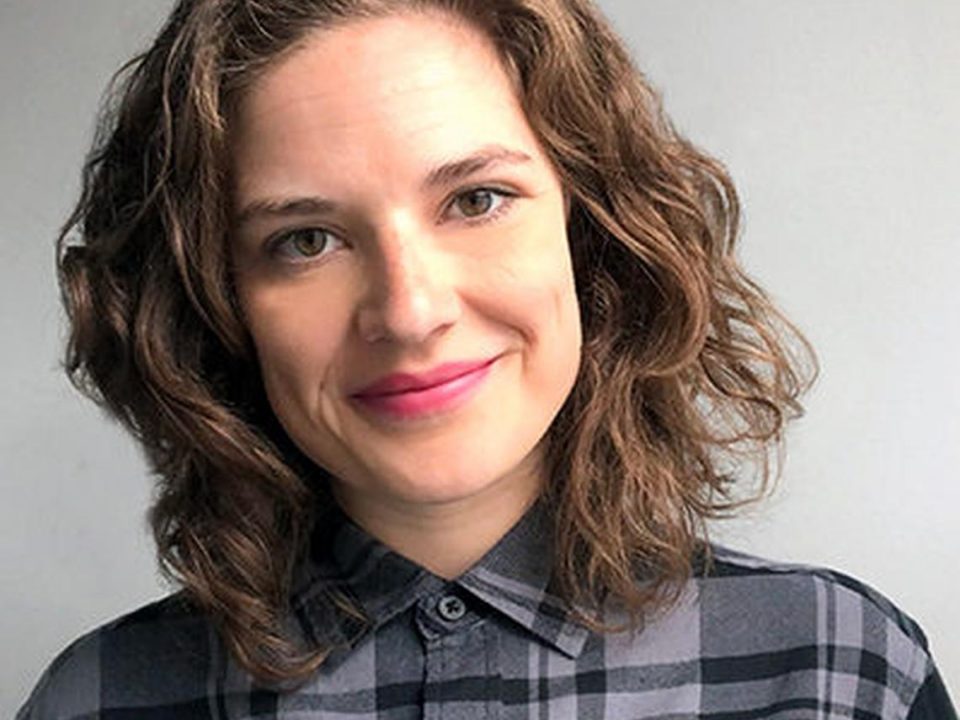 For region’s breweries, aluminum can shortage comes at an already difficult time 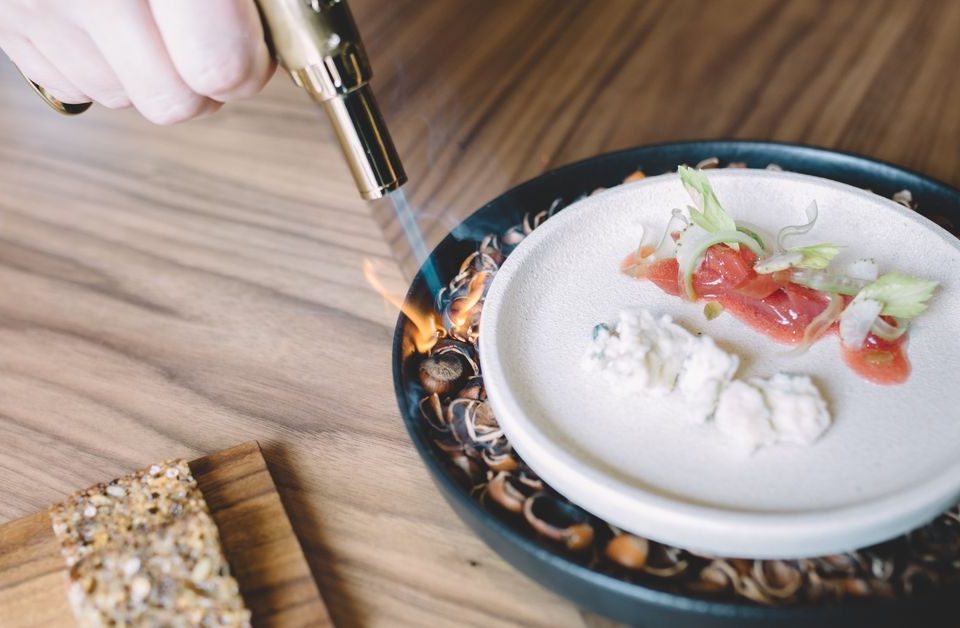 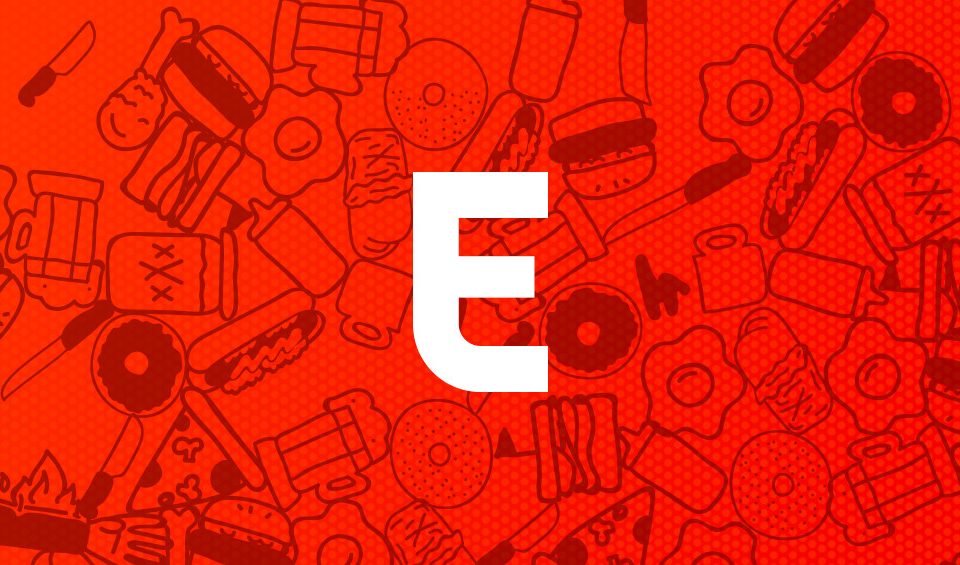