Small turkeys are in demand as Americans downsize at Thanksgiving 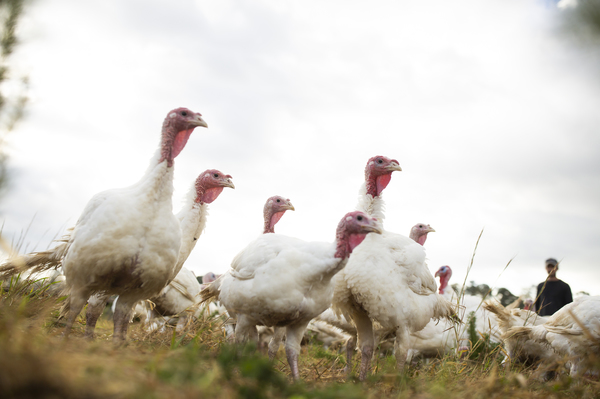 Broad Breasted White turkeys roam their open-air enclosure on the Shenk Family Farm in Newport, N.C. Smaller turkeys are in demand this Thanksgiving as many families plan on staying home rather than attending large gatherings.

Rachel and Joe Shenk raise turkeys on a small farm in Newport, N.C. The turkeys are a traditional commercial breed known as Broad Breasted Whites that they raise just for Thanksgiving.

“They’re not very smart, but they make up for that by being really friendly and interesting,” Joe said. The birds are a favorite of the Shenk family, and they respond specifically to Joe’s gobble calls, echoing them back to him.

The couple will harvest the birds the weekend before Thanksgiving, but for weeks now, they’ve been fielding orders.

“We probably have about 10 people that have asked like, ‘I want the smallest turkey you have,’ ” Rachel said. They raised approximately 70 turkeys this year.

As pandemic restrictions tighten across the U.S., many families are changing the way they’re setting the table for Thanksgiving. That means everything from the size of the gathering to the size of the turkey might look different this year. 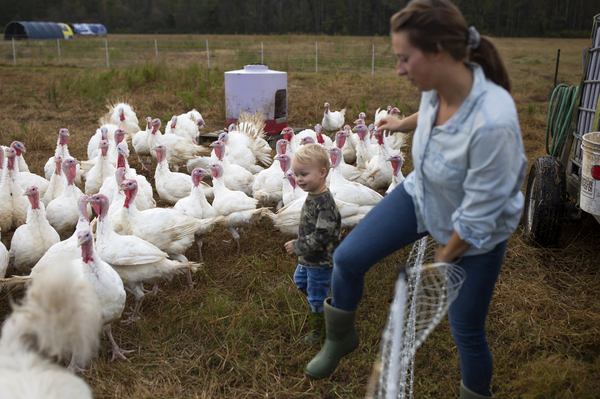 Rachel Shenk, right, and her 3-year-old son, Mason Shenk, step into the turkey enclosure on their family farm in Newport, N.C. Rachel and her husband Joe Shenk started their farm in 2017 with a desire to create a life that allowed them to focus on working together as a family. They now farm turkeys, chickens, and pigs.

Tonya Nash can count on one hand the number of family Thanksgivings she’s missed. She lives in Atlanta with her husband, Jamie, and two sons. But every year, they pile into the car and make the 12-hour drive to Houston to celebrate with her husband’s large, extended family.

That big family is the reason they’re staying home this November. Her youngest son was recently diagnosed with a severe form of epilepsy that puts him at high risk for complications from COVID-19.

A lot of things will be different about their family celebration this year. Nash is determined to have turkey, even if she’s the only one eating it. Her husband and sons aren’t big fans.

“You have to have turkey on Thanksgiving,” said Nash, so she got a small turkey breast — a far cry from the nearly 20-lb turkey they might have in Houston.

She’s not the only one downsizing, as federal and state officials urge people to not travel for the holiday and celebrate only with their immediate household. 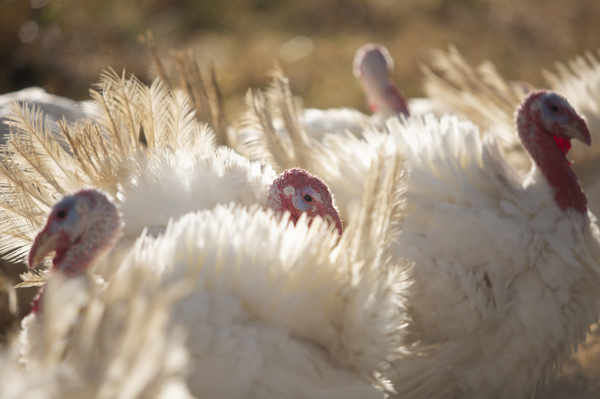 Broad Breasted White turkeys roam their open-air enclosure on the Shenk Family Farm in Newport, N.C. This year all of the approximately 70 turkeys, which will be 14-16 lbs once they are processed, have been reserved for Thanksgiving.

Butterball’s Turkey Talkline is already up and running. The hotline is staffed by trained experts to help answer any and all turkey-related questions people might have during the holiday season.

Like many Americans, Butterball experts Roni McDaniel and her daughter, Coren Hayes, are taking calls from their home office and kitchen table instead of the usual call center. They’re noticing a difference in what people are asking about.

“You know, oddly enough, they are looking for smaller turkeys,” McDaniel said. They have also noticed an uptick in callers saying it’s their first time cooking for Thanksgiving.

McDaniel and Hayes are used to working with newbies. Hayes remembers one particularly frazzled caller who only realized he had bought a chicken instead of a turkey on Thanksgiving Day.

“He seemed very sincere, ‘How do I cook this and make it seem like a turkey to my guests because I really don’t want to mess this up?’ ” Hayes said. Along with her standard food safety tips like making sure the bird is up to temperature, she also advised the man to come clean with the guests.

Challenging for farmers to make the adjustment 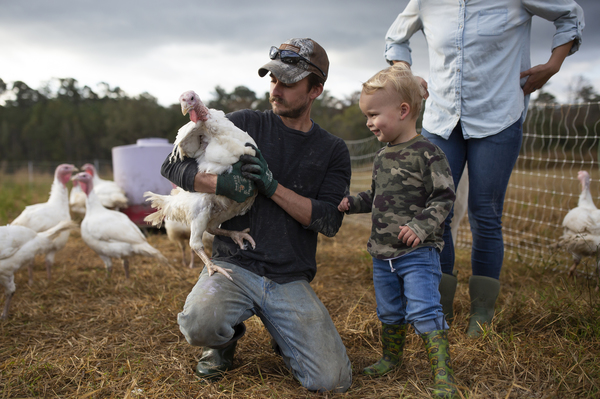 Joe Shenk holds a turkey for his son, Mason, to pet in the open-air enclosure on their farm. “They’re not very smart, but they make up for that by being really friendly and interesting,” Shenk said about the turkeys.

While the Butterball Turkey Talkline can answer all types of questions, including how to cook a smaller bird, it doesn’t quite offer the solution for farmers, many of whom are finding it challenging to make the adjustment to a trimmer turkey.

“These are in the pipeline for a long time. It’s not something we can just turn on and turn off,” said Ron Joyce, president of Joyce Farms in Winston-Salem, N.C.

Joyce raises Heritage turkeys, a type of domestic turkey that has historic lineage. He said they committed to raising a specific number of turkeys and their expected size almost a year in advance. His company is also used to selling to chefs at restaurants who often want extra large turkeys.

“There was no crystal ball to tell us that basically 95 percent of our customer base would be shut down this year,” said Joyce.

Improve sales for the holidays 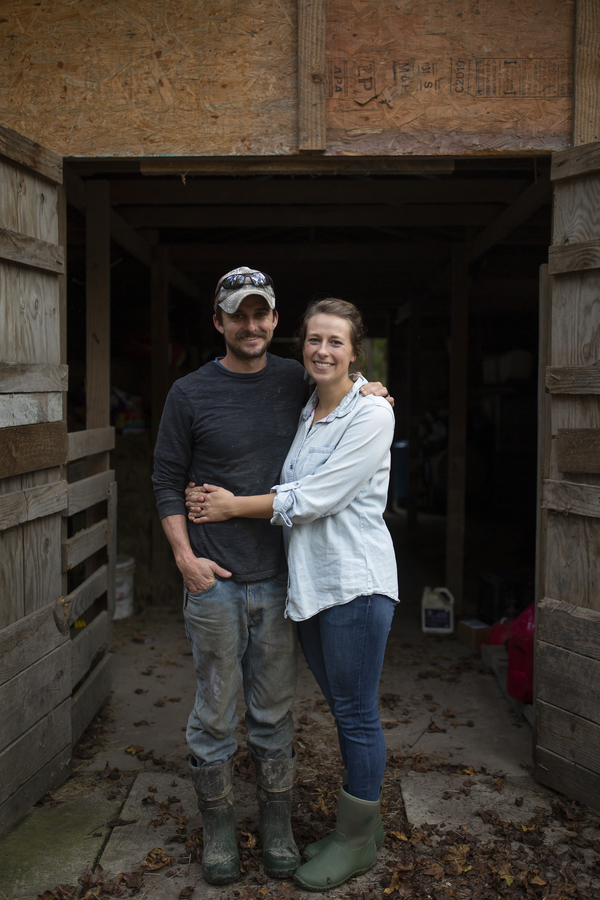 Joe and Rachel Shenk hope to add cows in the near future as they continue to farm full-time in Newport, N.C.

Instead, he said the company pivoted away from restaurants and seized another opportunity.

“What happened is during the panic, in the rush to buy meat and poultry in the grocery stores, a lot of the grocery store shelves were bare for a while, so we increased our direct to consumer,” Joyce said.

The average local household has helped them improve sales for the holidays.

Rachel and Joe Shenk are doing well this holiday season. They’re sold out for turkeys this year, which didn’t even happen last year. And for those customers who requested a smaller bird, the Shenks are helping them get creative.

“I have to go back and be like, ‘Well, would you be OK with a half turkey?’ ” Rachel said.

She’s found most of her customers are content with that even though anything less than a whole turkey is not what most people picture on their Thanksgiving table.

It’s certainly not the weirdest thing about 2020. 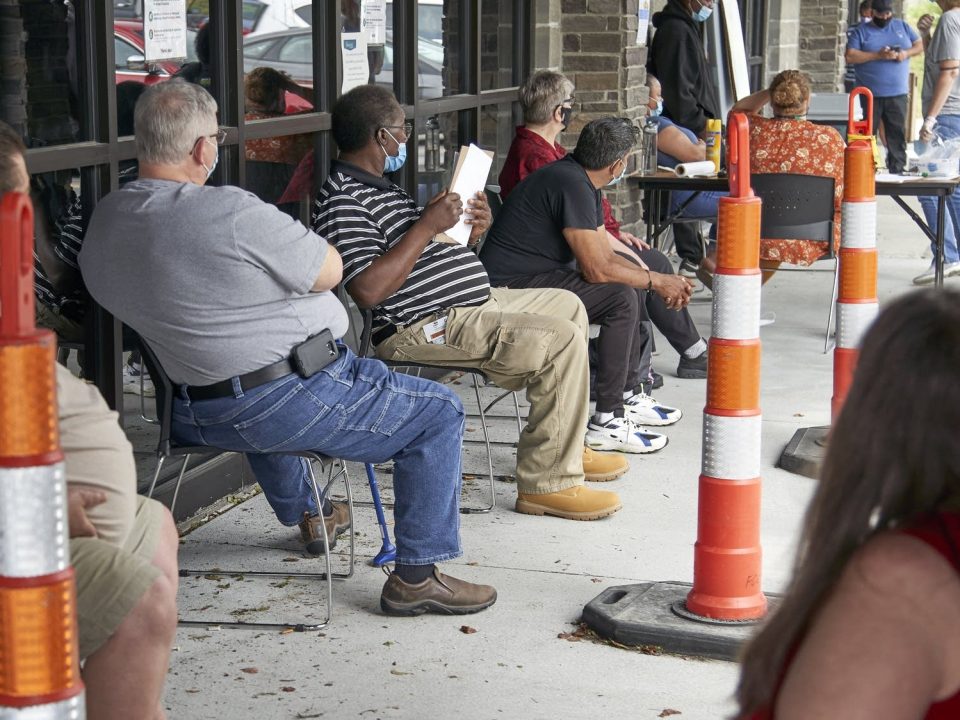 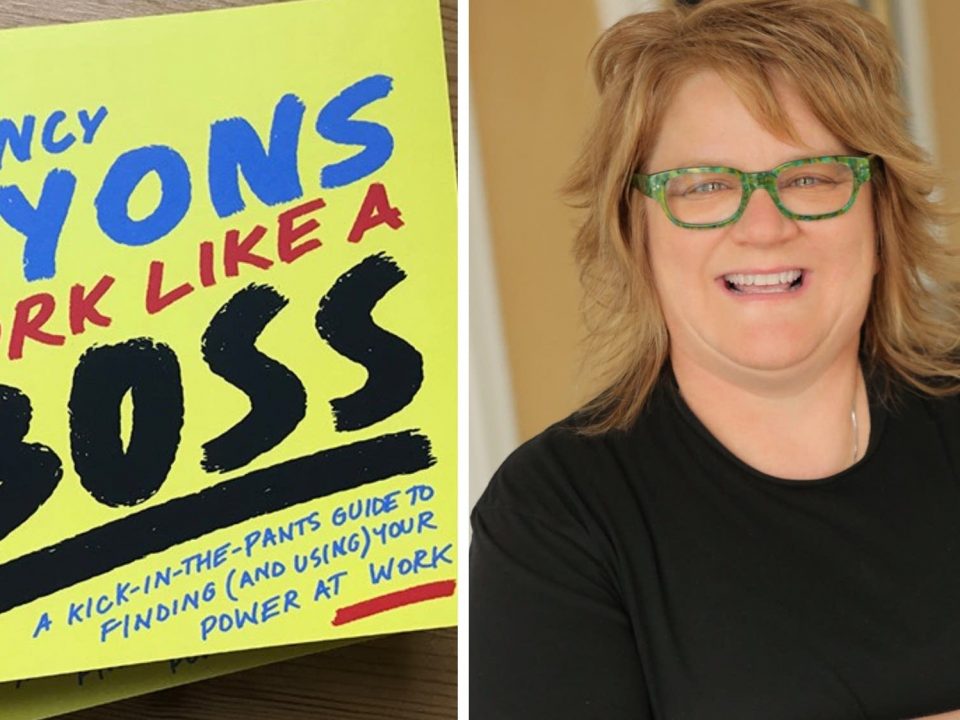 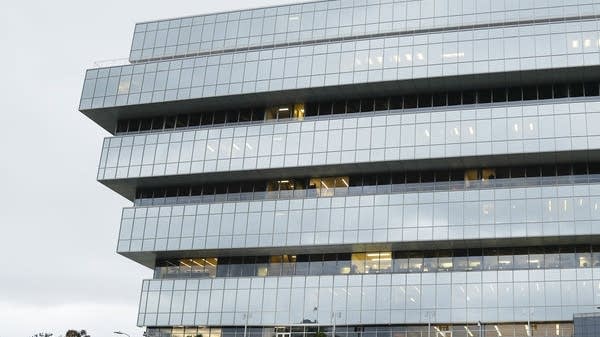