US industrial production jumps 1.1% in October

At stores and malls this year, it's Zoom Santa and wishlists shared through glass 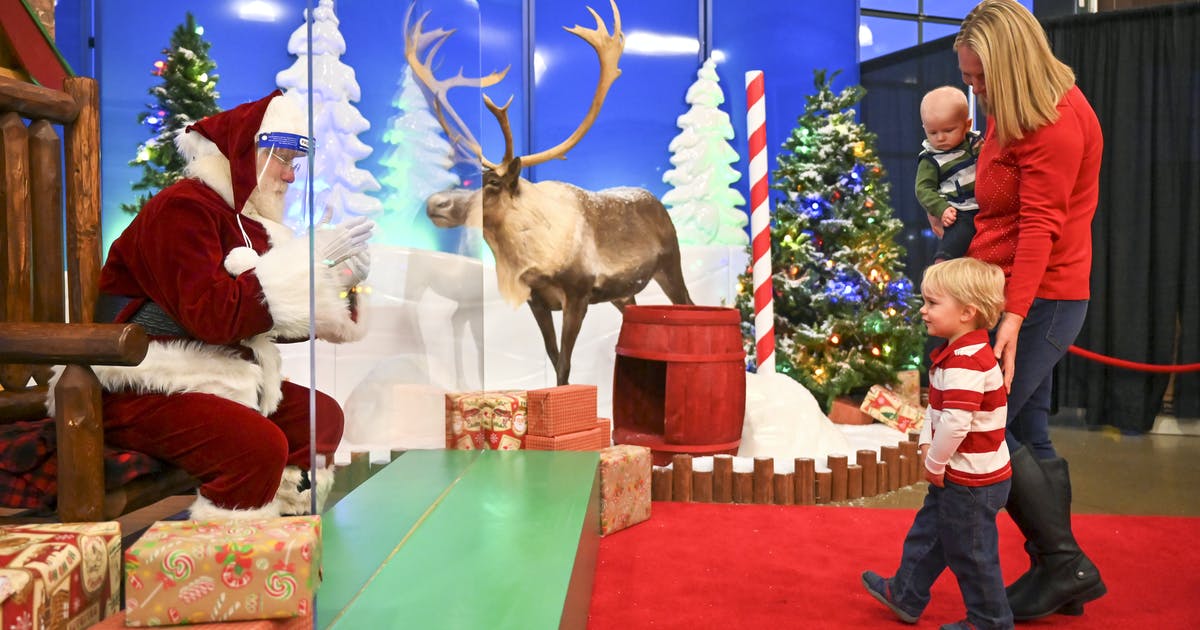 Santa Claus is normally decked out for the holidays in red and white, but this year may be the first when Santa sported a face shield.

Stores and malls across the Twin Cities are changing the way children visit with Santa as a precaution against the spread of the coronavirus.

Kids can’t sit on Santa’s lap and whisper their Christmas wishlists. Instead, Santa’s workshops have been forced behind plexiglass. For some starry-eyed children, visiting Santa will mean calling in on Zoom to see if they have made old Saint Nick’s nice list.

At “Santa’s Wonderland” inside the Cabela’s recreation store in Woodbury, Santa’s elves serve as cleaning bodyguards armed with disinfectant, which they spray on an acrylic divider in between each visit, and forehead thermometers used to check children’s temperatures before they can get close to the big guy.

“It’s a little different,” said Shannon Mueller, of Hudson, Wis., who brought her children two-year-old, Porter, and five-month-old, Rylan, last week for a contact-free experience with Santa. “But I think being with Santa never loses its magic for the kids.”

Madelyn Moran, who is six months old, had her first visit with Santa while separated by plexiglass.

“It will be interesting explaining to her one day why Santa’s wearing PPE [personal protective equipment],” said her father, Andy Moran.

“Santa Scott” smiled as he took pictures and waved to kids from his seat behind the barrier. “I’m glad that Santa is able to still be here with the children,” he said.

The Mall of America will begin to offer virtual visits along with in-person Santa visits Friday with guests required to “Santa-tize” their hands and as Kriss Kringle greets them from a window of his cabin.

Rosedale Center is going even more high tech. The mall has done away with its traditional photos with Santa to offer an augmented reality experience where kids can test drive Santa’s sleigh and soar over cities and mountains displayed on large screens.

Some stores have gone all-digital to preserve a version of their Santa traditions. Bachman’s Lyndale Avenue floral and gift shop in Minneapolis has hosted a holiday play with Santa and his head elf Albert for more than 30 years. One year Santa took dance lessons. Another year Albert ate gumdrops that made him quack like a duck.

“It really became a tradition for families to connect with these two storytellers,” said Karen Bachman Thull, vice president of marketing and corporate communications at Bachman’s.

Because of COVID-19, the store can’t host the play in person. Instead starting this Saturday, families can watch taped portions of the show on Facebook and Instagram with new segments available each week. There will also be Facebook Live broadcasts at the beginning of each show with Santa and Albert. Children can download virtual activities. Large cutouts of Santa, Albert and new elf Sprinkles will be stationed at Bachman’s stores for photos.

“Usually they do it and it brings people into the store and hopefully people will pick something up and it drives business. … This year it’s just [Bachman’s] giving back to their community,” said Kevin Dutcher, who has played Albert for more than two decades. “They just wanted to do it to continue the tradition.”

The Minnesota Streetcar Museum will also let kids schedule time online to talk with Santa on Zoom from his home at the North Pole.

“While they discuss their wish list and ask about flying reindeer, you’ll have plenty of time to save the experience with a screen shot for your holiday card or scrapbook,” a release said.

The holidays won’t just look different for children this year but for their shopping-aged family as well. Some retailers like Minneapolis-based Target began offering their holiday sales early in October as they looked to spread out holiday deals throughout the winter to help prevent large crowds.

In a report this week, the National Retail Federation (NRF) said more than 40% of holiday shoppers surveyed said they started holiday shopping earlier than normal.

At the Cabela’s in Woodbury, Fisher Rayder, age four, reached out to touch the barrier while visiting Santa with his younger brother and parents.

“It’s a different world,” said their mother, Heidi Rayder, from Apple Valley. “The kids seem to roll with it and make the best of it. We can learn from them.”