How can Minnesota have a record-breaking surplus in a challenging economy? 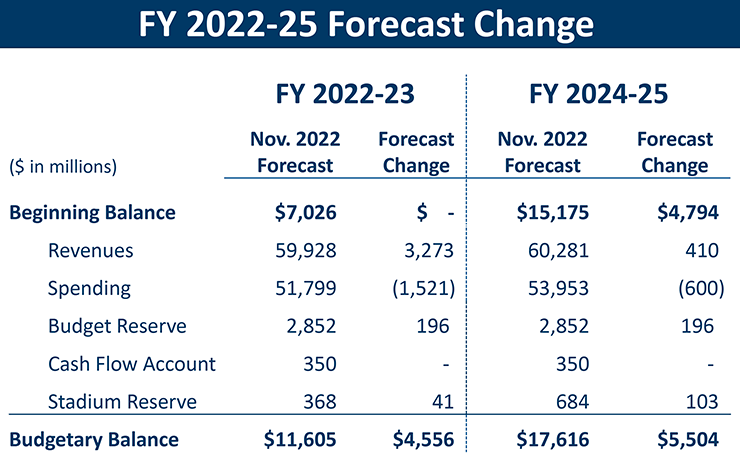 Most of the attention is paid to the sexier half of the Minnesota economic and revenue forecast: how much money the 2023 Legislature will have to allocate in spending increases or tax cuts.

Not to put off the answer for too long, it’ll be a lot. For a state that spends around $2.16 billion a month, the amount of collected and projected tax revenue is more than the amount needed to cover current state budgetary costs – by $17.6 billion.

But there also is a disconnect between that unfathomable $17.6 billion amount and the other half of the report released Tuesday. While taxes continue to overperform, the underlying economy – state, national and global – is getting squishier. The state’s macroeconomic vendor, IHS Markit, says the nation will be in recession soon, if it isn’t already.

And still, tax revenues exceed expectations. How’s that? State budget officials Tuesday had the chore of making sense of it all, tempering the giddiness the surplus number causes with the pit-of-the-stomach uneasiness about what they euphemistically call “headwinds.”

“In this briefing we’ll talk about what led us to the largest projected balance in the history of the state of Minnesota,” said state Commissioner of Management and Budget Jim Schowalter. “But we’ll also talk about inflation, we’ll talk about a mild recession, we’ll even talk about slowing economic growth.”

But that said, Schowalter also spoke in glowing terms about the budget.

“Despite the headwinds … Minnesota remains resilient and our budget outlook bright,” he said. “As a result, the governor and lawmakers have more options than they usually have had to invest in Minnesota and address the needs of Minnesota’s families, business and communities.”

Forecasts over the last three years have focused on the impacts of the COVID-19 pandemic that threw the state economy in a deep recession but turned out shorter than expected due to massive federal spending and an unequal impact on residents depending on whether they could keep working – perhaps from home – or were jobless due to forced closures.

Schowalter said this forecast shows the state “settling into normalcy” after the pandemic years. But it must be a new normal because Schowalter then added of the surplus, “that’s an incredible balance any way you look at it.” At the same time that tax collections are higher than forecast, spending has fallen, especially in public schools due to declining enrollment and health services due to increased pandemic-era federal funds.

The politicians, too, have to cover both emotions. The surplus provides unprecedented opportunities to make taxes more fair and state programs more helpful. But don’t get hopes too high because, well, those headwinds.

Gov. Tim Walz termed this “a good spot to be” but said the budget numbers don’t tell the story of Minnesotans struggling with costs of child care and gasoline, with students needing more help in school or with communities turning to property tax hikes to cover basic services.

“The macro picture is solid. The golden opportunity we have – to make Minnesota even better and fairer and more inclusive and more-prosperous state – is there,” he said.

Walz said he would present his budget on Jan. 24 and hinted at a few things it might include. He restated support for at least a partial elimination of state taxes on Social Security income, endorsed universal school lunches and said he would look at program enhancements and tax reductions that help working class families and senior citizens.

He also endorsed increasing local government aid and county program aid that could reduce the need for more property tax hikes. And he re-upped his call for tax rebate checks, which he’d suggested should be $1,000 per taxpayer up to $2,000 per household.

“If I were someone sitting out there … my expectation is they will see a reduction in some of the costs to them, some improvements in the things they’ve asked for like paid family leave or health care access,” he said.

Responses from legislative leaders were muted. For the first time in Walz’s time in office, Republicans hold no majorities and cannot block his plans. It was telling, then, that Walz’s plan for rebate checks received a warmer response from GOP leaders than his fellow DFLers.

“This is Minnesotans’ money,” she said. “That money needs to go back to Minnesotans.”

Wish lists at the ready

Once the bottom line number had been released at 9:30, interest groups began getting in line: Education Minnesota, The Coalition of Greater Minnesota Cities, affordable housing advocates, health care unions, construction unions, paid family leave advocates. All made the case that the size of the surplus means the needs they push for can be met.

“Our state leaders have an opportunity to come together to ensure that all our neighbors have homes from which to build their future,” said Anne Mavity, executive director of Minnesota Housing Partnership.

“The staffing shortage in senior care is at crisis level, affecting seniors and their families in every corner of the state,” said the Long-Term Care Imperative in a statement. “Only lawmakers can address the crisis to ensure access.”

On the tax cut side came the Minnesota Chamber of Commerce.

“After nine consecutive years of budget surpluses, Minnesota should join other states in meaningful tax reforms to encourage investment and create opportunity for our state,” said chamber president Doug Loon.

What might his budget proposal look like? Walz looked back at the agreed-to-but-never adopted bipartisan deal last spring that divided the then-record surplus of $12 billion three ways: one-third to tax cuts and credits, one-third to spending increases, one-third to savings.

The last part was a concession to Republicans who wanted the next Legislature to have a bigger voice in using the surplus. That was when the surplus was less and that was when Republicans thought they would control both houses of the Legislature. They won’t next year, and DFLers will make the choices if they can keep narrow majorities together.

Walz said some one-time investments, some tax reductions and some increases in ongoing programs – especially in education – will likely be in his plan. But there might be less need now to keep that $4 billion unspent with a full, two-year budget being drafted.

Walz, joked about the size of the DFL majorities by telling a riddle: “You know what you call a one-vote majority? A majority.”

New Senate Majority Leader Kari Dziedzic of Minneapolis said her caucus recognizes that despite booming tax collections that reflect that some Minnesotans are doing well financially, many are not.

But new House Majority Leader Jamie Long, also of Minneapolis, acknowledged that there will be more asks than even this massive surplus can serve.

“Eighteen billion is a big number, for sure, but you saw the vast majority is one-time,” he said. “We don’t have the surplus that it might appear we do.”

But he said the Legislature will do “remarkable things.”

The pandemic and now its aftermath have given economists fits. First they forecasted a deeper drop than occurred. Then they failed to catch up with the economic recovery that crafted these surpluses. Now, they are reconciling a growth in tax collections with a weakening in the economy.

State economist Laura Kalambokidis said that compared to the last forecast in February, most economic indicators are trending down. A mild recession may have already started, and the state’s record-low jobless rate will tick up a few percentage points. But the numbers never get bad, bad. Job growth slows but never turns negative. Wage growth slows, too, but is not expected to fall below 4% growth per year. The shallow recession ends in the third quarter of 2023.

Even higher interest rates have a silver lining. Some taxes benefit from higher prices and wages, and the state’s cash accounts are earning more in interest.

“While price indices have come in lower than expected in recent weeks, persistent inflation could lead the Fed to act more aggressively to raise interest rates,” Kalambokidis said. “This could induce a contraction in 2023 that is deeper and/or longer than the forecast.”

DFLers make much of the fact that state law does not allow for estimates of inflation to be included in projections of how much it will cost to maintain the current budget for two years. So the current two-year $52 billion budget will cost $54 billion to maintain through the summer of 2025.

But inflation would only add $1.5 billion if all agencies were allotted extra money to cover increased costs. That’s a lot of money but well within the capabilities of that surplus.

Inflation would have a $3.5 billion impact on the budget that kicks in July 1, 2025. But that, too, is within the forecasted surpluses for those years when tax collections are estimated to exceed state spending by $8.4 billion. That means that as far as state economic forecasters can see – five years is forever in that line of work – the state has budget surpluses.

Of course, that all depends on how much of that surplus is spent, both in new or expanded programs or tax cuts. Walz and the legislative leaders kept saying that some $12 billion of the $17.6 billion extra is carried over from the current budget and isn’t expected to keep repeating itself year after year. That triggers talk of one-time spending, say rebate checks on the tax cut side and one-time investments in programs on the spending side.

Still, there is nearly $6 billion a budget in money that is expected to be sustained over the coming year. That is the type of situation that can politically and fiscally justify ongoing costs and ongoing tax reductions. There was a time not very long ago when a $6 billion surplus would have been unheard of, a record all by itself. Now, it’s leftovers.

But wait, there’s more. The state’s current rainy day savings account is $2.6 billion. It will grow to $2.85 billion. And the state always keeps $350 million around to cover any short-term ups and downs in tax receipts and spending.