Find the Best Taco Spots in the Twin Cities 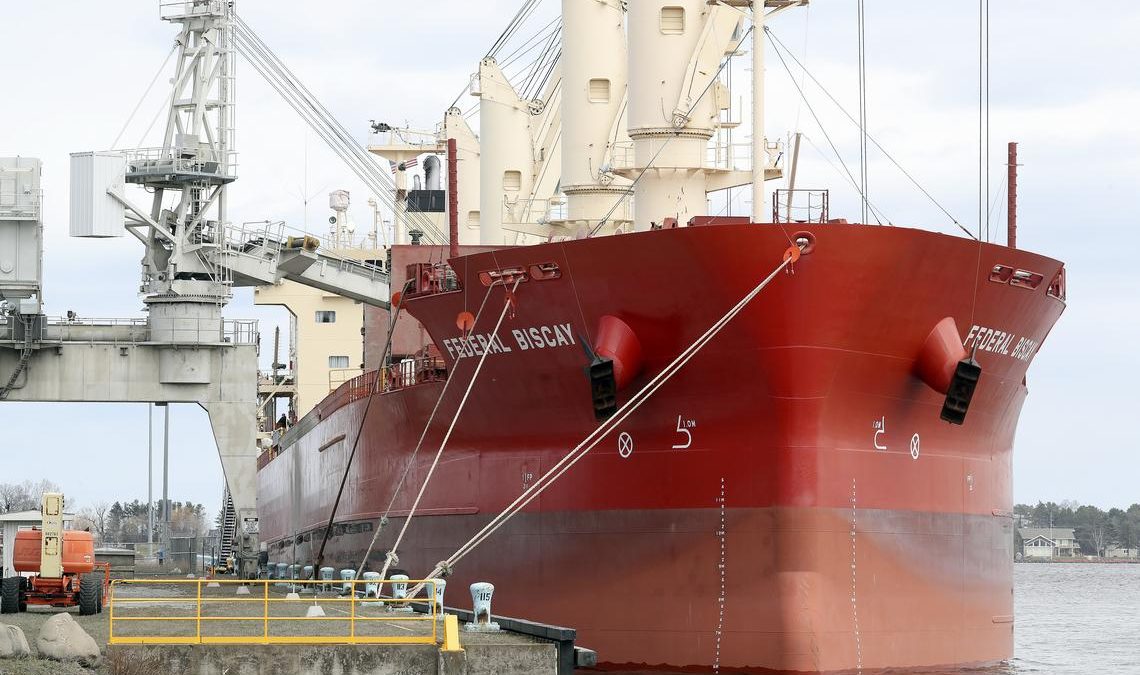 An annual ceremony, scrubbed last year due to the ongoing COVID-19 pandemic, was met with glee by Duluth’s mayor and a host of shipping industry dignitaries.

“This is a happy occasion, to be here together at an event,” said Duluth Seaway Port Authority spokesman Jayson Hron, who conducted the program and made note of the ubiquity of masks being worn.

The Biscay, owned by Montreal-based Fednav, arrived Sunday from Turkey, transiting the Duluth shipping canal and sailing under the Aerial Lift Bridge shortly after 4 p.m.

Docked at the CRH Cement Terminal on Rice’s Point, the Biscay was scheduled to unload 21,000 metric tons of cement — the first of six foreign ships ticketed this season to unload cement to be used in transportation infrastructure projects throughout the Midwest and as far north as Edmonton.

Mayor Emily Larson, dressed appropriately for the weather and occasion in a sailor’s peacoat, noted the way the world comes to Duluth via the ships affectionately known as “salties.”

“We are proud to be connected to you today,” Larson told Master Melwyn Dias and the crewmembers flanking him. “We’re grateful for you connecting us and our economy to the world.”

A native of India, Dias reported the voyage couldn’t have gone more smoothly. Though he’d been to Duluth once before, he’d never been part of a first-ship ceremony, he said, noting that he’d followed his grandad and father into work behind the ship’s wheel.

“It’s not just me,” Dias said. “A lot of generations of us have been doing this profession.” 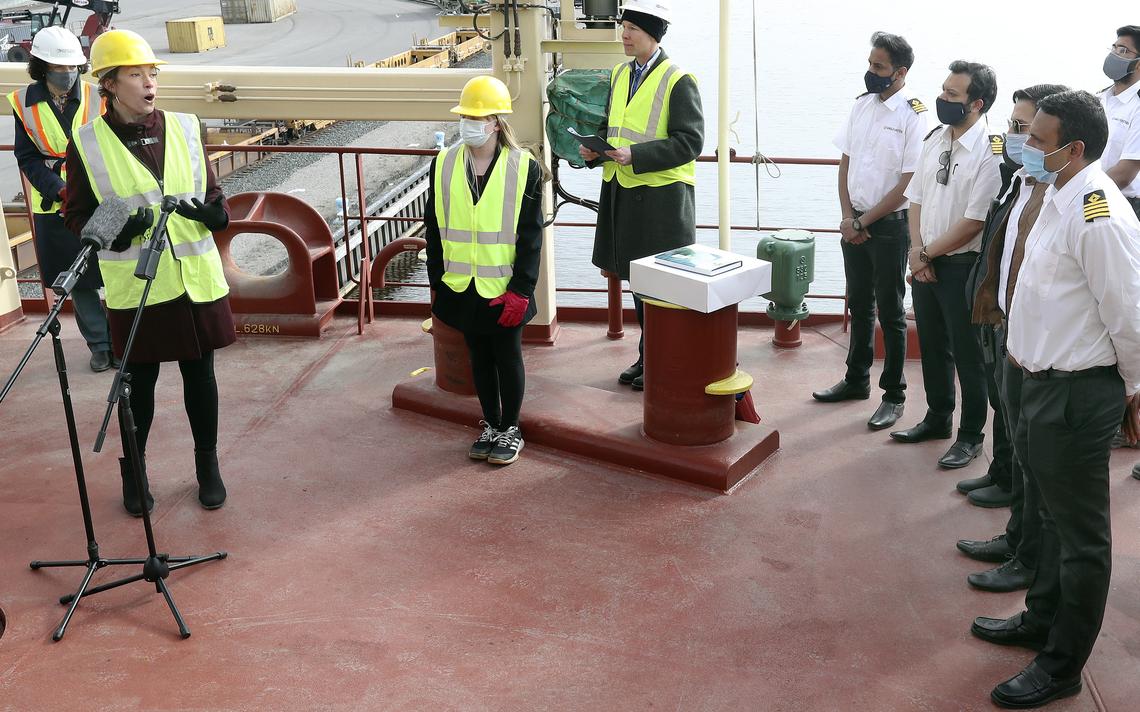 Duluth Mayor Emily Larson talks to the officers of the Federal Biscay and others attending the First Ship ceremony aboard the ship Tuesday, April 20, 2021. (Steve Kuchera / skuchera@duluthnews.com)

From CRH, the vessel will move about the port to load grain — canola, specifically — and be bound for Mexico. The News Tribune asked vessel agent Stephen Sydow, of Duluth-based Daniel’s Shipping Services, how that transition was made, going from raw materials to food source.

“You’ve got to broom it, pressure wash it and squeegee it,” Sydow said. “You’re putting food in there, so it’s got to be clean.”

DeLuca made sure the 21 sailors aboard the Biscay didn’t leave without satisfying their sweet tooth. The Port Authority presented the crew with a salted-caramel chocolate ship.

Visit Duluth capped the ceremony by announcing the winner of the 38th annual First Ship Contest. More than 20 contestants out of 4,500 submissions guessed April 18, but Amanda Eccles, of North Mankato, guessed April 18 at 4:04 p.m., missing the Biscay’s Aerial Lift Bridge transit by a mere 8 minutes. She received a two-night Duluth getaway.

“She was super excited,” Visit Duluth spokeswoman Maarja Anderson Hewitt said, a hint of normalcy on the cold air. 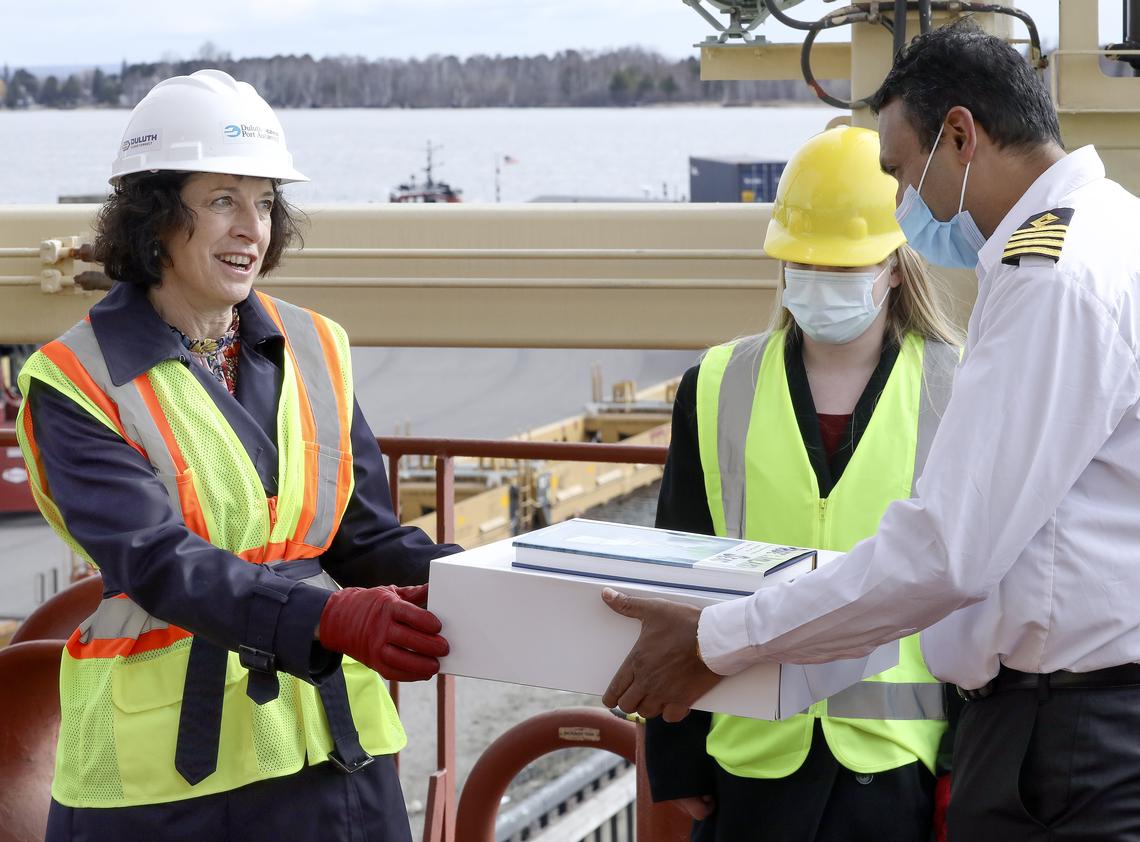