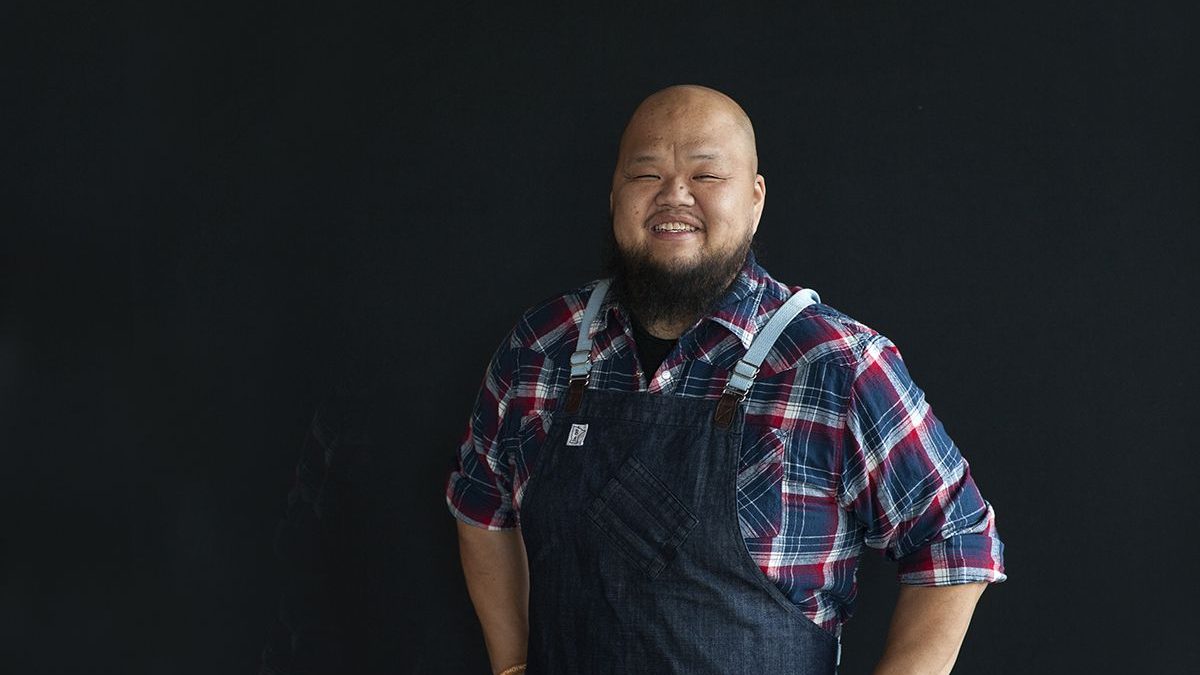 Optimism and anticipation are the words of the year thus far with remarkable changes on the horizon, including the next chapter in story of the pandemic. The coming months promise exciting news, including that of new restaurants from established tastemakers like Ann Kim and Yia Vang, plus a revolutionary new way to approach cuisine from Sean Sherman, and more fried chicken – the dish we couldn’t get enough of in the last year.

So, as we shuffle through second winter on the way to false spring and eventually, third winter, before actual thaw, these are the new restaurants we’re as excited about as warm rays of sun on Vitiman D-starved skin.

Ann Kim knows how to make a statement, from her famous “fuck fear” James Beard Award acceptance speech to her audacious opening of Pizzeria Lola when she was better known as a local stage actress than a chef. Her latest venture might be her most unexpected move yet: Sooki & Mimi, named for her and her partner Conrad Leifur’s grandmothers, will serve dishes rooted in Mexican traditions, with the chef’s Korean heritage, and her typical verve of finding perhaps unexpected flavor combinations that quickly become classics. (See her Lady Zaza pizza with Korean spice, or the Japanese sweet potatoes at Young Joni.)

This restaurant has been a longtime coming, long enough that we were anticipating it back in 2019, aka The Before Times. Kim took her time in making certain this restaurant was 100% ready to open, while hosting taco pop-ups, and serving take-home meals ahead of time. Now, the eatery will open for in-person dining February 3 with a 10-course tasting menu that’s rooted in vegetables and nixtamal with optional wine, cocktail, or n/a beverage pairings.

Young Joni’s bar master, Adam Gorski is also back, creating a whole beverage menu for exploration. There are limited reservations available for the bar seats, but there is no food available to order with the drinks for now.

Chef Yia Vang’s road to a permanent restaurant mirrors his family’s experience, and the story of his Hmong people from nomadic exsistence, to finding a temporary place to build a life, to eventually making a long journey towards home. For Vang, that meant being born in a refugee camp, Vinai, in Thailand, before arriving in the United States with his family, who eventually put down roots with many other Hmong refugees, in St. Paul. Vang grew up standing at his father’s elbow, closely examining his work as he would grill food for the family. He watched his mother take a few ingredients and create full meals. Back in 2018 he marveled at the brilliance of his people’s cuisine, taking the bones of a chicken, a few bits of meat, and creating a sumptuous broth. Adding a handful of herbs, some citrus, and chilis, and serve it all over rice. A humble meal that was rich with flavor from the land.

His journey to being a locally lauded chef began by serving pop-ups in backyards, grilling like his father would, using the lessons he gleaned from his parents and his experience working in restaurants to create huge meals. Eventually, the operation morphed into Union Hmong Kitchen, his roving pop-up that continues to serve out of a St. Paul kitchen.

Vinai will be a homecoming of sorts. In that 2018 conversation Vang predicted he would one day find the right space, to settle, and build the restaurant he’d been working so long to create. Vinai will be that eatery, and he’s bringing his friend, chef Marshall Paulsen in to enjoy the ride. Paulsen, the longtime chef at the Birchwood Cafe brings his experience of seasonal cooking close to the land. Birchwood has long been known as an advocate for small farmers. 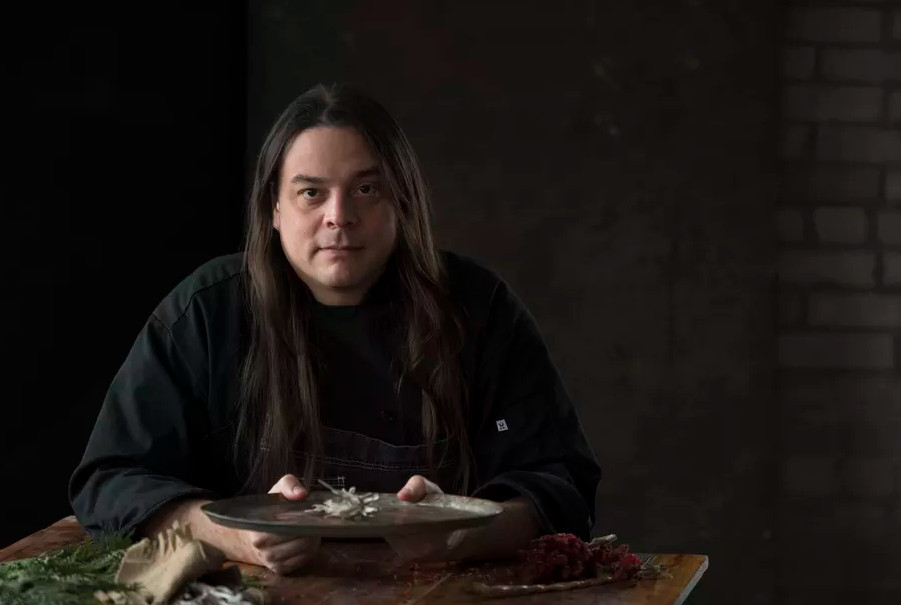 This is another long-anticipated restaurant that should finally come to fruition later this year. chef Sean Sherman and partner Dana Thompson, better known The Sioux Chef have been dedicated to educating many about Native American foods and advocating for de-colonizing cuisine. Last year The Sioux Chef’s Indigenous Food Lab moved inside Midtown Global Market has worked to provide meals to community elders and others affected by the hardships of last year.

Owami open amidst the Mill City ruins by the Mississippi River as part of the Water Works development and run seasonally alongside the park. The space overlooks the river and a few remaining islands, which were a sacred space for the Dakota people. Thompson is a descendent of the Wahpeton-Sisseton and Mdewakanton Dakota who grew up in Northern Minnesota. Sherman is Oglala Lakota, born in Pine Ridge, South Dakota. Their organization is built with many other native people from different tribes to work together to share the food of the country’s first people.

While the menu will be free from European influence, much of Owami’s foods should be familiar to anyone who has reveled in the seasons in Minnesota: toasty wild rice with that singular texture, lake fish, venison, and native game birds with berry sauces, and heirloom hominy with teas to sip make from cedar, raspberry leaves, sumac, and cranberries. 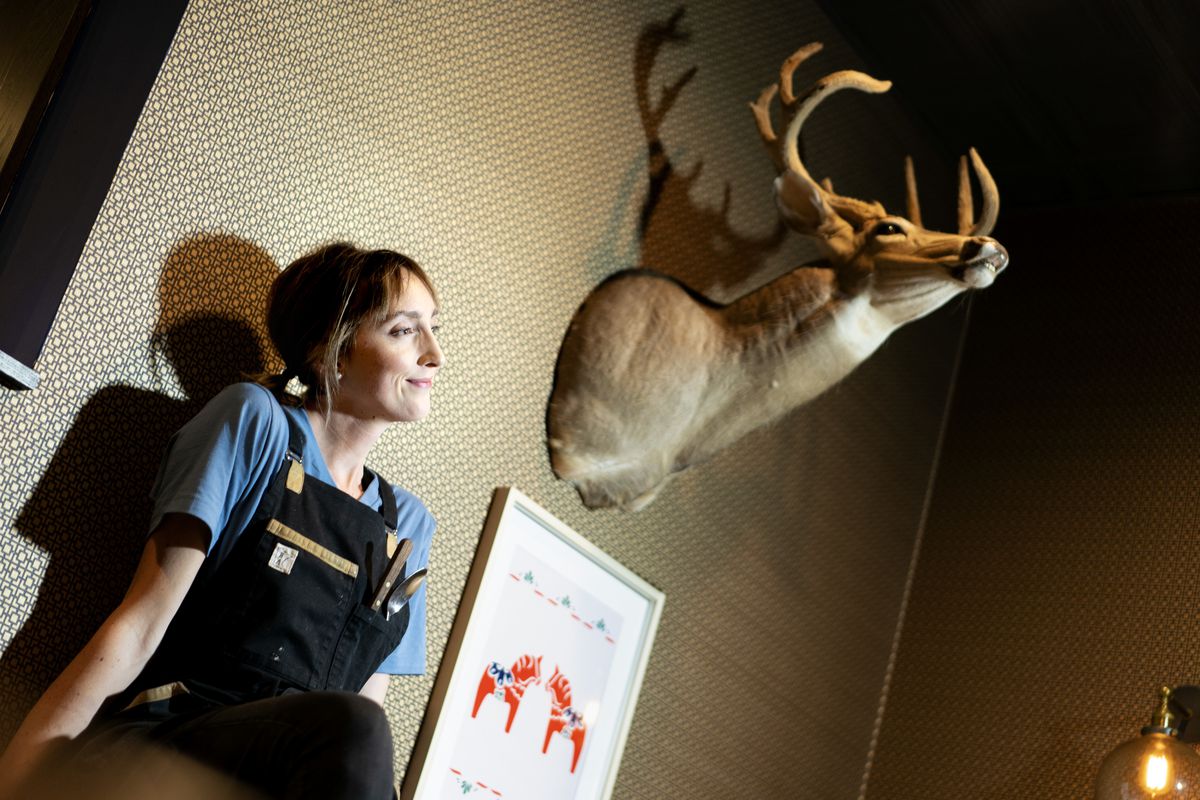 Chef Karyn Tomlinson inside her pop-up Uffda, when she partnered with Travail in 2019 Courtney Perry/Travail

Chef Karyn Tomlinson has already taken over the former Bar Brigade location in St. Paul’s Highland Park and is offering small tastes of what her new restaurant will become. Comfort foods are available for Saturday takeout and Sunday brunch pick-up.

Once able to safely open, the eatery, inspired by Bishop Myriel in Victor Hugo’s book Les Miserables, will focus on hospitality and Tomlison’s elegant approach to cozy comfort. Tomlinson has made a name for herself both as a pastry chef and chef at the now-shuttered Corner Table. Her delicate way with familiar flavors, like a truly revelatory Swedish meatball, will be given free reign inside this intimate restaurant space.

There hasn’t been much good news for our downtown Minneapolis in the past year, but there are slowly signs of life returning to the once-bustling metro area. With the optimism of a Mary Tyler Moore hat-toss, we’re looking to the revitalization of the once (and always in our hearts) Dayton’s building on the corner of 7th Street and Nicollet Mall. The once glorious beacon of retail beauty is being repurposed as retail, food, and office space. City Council member Lisa Goodman recently took a guided video tour of all the changes and what they shared of the building is spectacular. Much of the important historic details have been preserved (the art deco ladies room remains, but it looks like it won’t be open to the public.)

On the ground floor will include several food merchants to operate stands, and the jewelry store is looking for someone to lease it as a full service eatery.

No opening date has been announced, but that hasn’t stopped us from peeking in the ground floor windows. Even with all the changes, this is still destined for a magnificent comeback.

The Future of Hummus Is Local, According to Two Minneapolis Brands